I am asking you to stop thinking of your part of the equation as a vertical silo. There are new synergies that can happen and now is the time to think of inclusion instead of bidding higher and settling for less.

It is time to embrace the rest of the group that will make up the new and includes each part of the new team. There are great strides that can be made in the engine, but the engine is only part of the equation. If you include Energy and infrastructure, technologies that make gasoline and oils cleaner you are no longer a vertical silo.

Instead of challenging the actual end number of 54.5 mpg or 50.8 mpg by 2025 why not look at what makes up those figures and include the emerging markets that will be incorporated in the greenhouse gas emissions of the future.

Gasoline and diesel are not going to magically go away. That doesn’t mean there can’t be fewer emissions; Continental is bringing out super clean electrified diesel, hardware that burns cleaner. 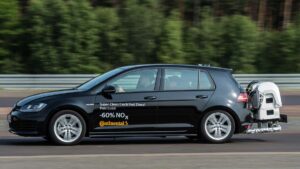 Synthetic fuels can be added to conventional fuels and will burn much cleaner. Bosch released a study today about synthetic fuels being the key to make combustion engines a carbon-neutral powertrain. 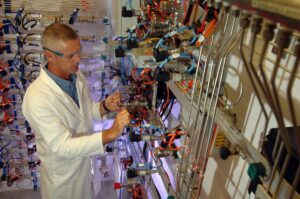 Synthetic fuels can be added to conventional fuels

People talk about raising the price of gasoline because the price of gas is so low; which is why people are using more gasoline and creating more CO2. What about if we increased the price of gasoline but decreased the CO2? In Germany, they are making fuel out of hydrogen and CO2. CO2 from the air. Continental AG has been testing synthetic fuel on vehicles and has found that 15-30 percent synfuel mixed with conventional fuel has no adverse effect on a car.

A regular gallon of gasoline costs less than $3/gallon – well, outside of California – Let’s say synfuel is $5 a gallon. Mix 25 percent into conventional fuels, charge $4 a gallon, and you are 25 percent CO2 neutral. Experts say this fuel will be ready by 2025. If we can bring it to market faster, will there be a credit for it? We are not interested in just bringing ZEV vehicles to market if the electricity is going to create more CO2; let’s recreate the whole well-to-wheel without increasing CO2.

We hear of car dealerships adding solar panels and charging units. Some even add public facing charging units for public use. Does that help create the clean electric infrastructure?

Each day we hear another Country or car company saying they will go electric or bring out another hybrid/plug-in/electric vehicle. The infrastructure is not there, and California – the leader in Zero emission vehicles – has promised an infrastructure if car companies would just deliver the vehicles. The hydrogen highway is still not completed.

The hydrogen highway is still not completed

A gasoline station owner I know makes six cents a gallon on the gasoline/diesel they sell. They make $1.50 a gallon on the convenience sells. They don’t care what type of energy they sell as long as they can get the customer in the door. Why not give credit to a company that helps create the highway to domestic clean energy.

I know the ultimate goal here for many are no emissions, but you’re asking people to make a significant leap from a 20 mpg gasoline hog to a no emissions vehicle with marginal marketing and only regulations shoved down their tailpipe. 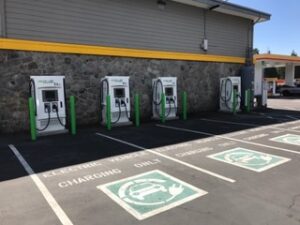 This dream can’t come soon enough, and we need everyone on board to develop this as quickly as possible. When people are driving away from a hurricane or an earthquake they are also driving away from known places to energize their vehicles. Ninety-nine percent of the individuals in those vehicles have only one type of energy they can refuel their car with when they run out. If that fuel isn’t available that car is stuck, and so are the people. And they are probably still in harm’s way.

Electric vehicles are in their infancy. There is so much more education that needs to happen. I am the co-host on the Washington Post car chat every Friday, and I can tell you that People don’t understand the difference between a ZEV and a PHEV; they don’t know that a plug-in hybrid can take electricity or gasoline.

Is there a ramp up that we are using to show people the path from gasoline or diesel to a plug-in hybrid to a ZEV vehicle? If more people had plug-in hybrids and could charge at their home, office, hotel, or energy station (which included gasoline diesel or energy) would that make more sense than going straight to ZEV when the infrastructure isn’t there? What are you going to do about the people that can’t charge at home? 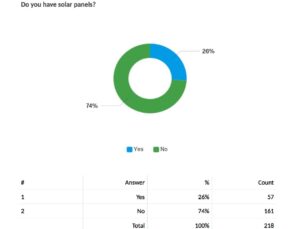 26 percent of the EV owners had solar panels

Are you going to give people who have solar panels on their homes a bigger discount for buying an electric vehicle? They are completely invested and as clean as they can be, even selling their unused energy back to the grid. You give them a credit for solar panels or for electric vehicles, but what if they buy both at the same time? What if you gave a household another credit for getting both solar panels and ZEV vehicles in the next three years?

With a paradigm of thinking, and an inclusion of new markets, a credit over a concentrated amount of time to build up infrastructure faster you will see the continued surge to zero emissions and domestic clean energy.

This article is a speech that was given at Strategic Vision’s 4th annual Research Convention.