It’s hard to believe it’s only one week since the New York auto show. It’s been a long week, and I’m so happy to be back with you. I put up a post about the cars I saw at the New York International Auto show.

The last of my Mother’s brothers died this week. I traveled from California to St. Johns, Newfoundland, Canada, then drove eight hours – four in the snow – to his home in La Scie to say goodbye to my favorite Uncle.

If you have ever been to Michigan and complained about their potholes, go to the hinterlands of Newfoundland, Canada. Michigan’s potholes are nothing compared to the quality and quantity of the potholes on the road to La Scie, Newfoundland.

A couple of my cousins – the two thirteen-year-olds – drove with me and we had a blast. Every time I went by a sign that said “beware, potholes” I would yell take a picture, take a picture. I am just baffled at how much money it takes to make a sign, paint it, pay someone to dig a hole and stick a rod in the dirt, and put the sign up that says beware potholes. It is incredulous. Just fill the bloody holes! Seriously.

Before I left for Canada, I drove the 2017 Ford Transit 350, HR Cargo Van. It reminded me of the Dodge 2500 that Stretch and I drove from Toronto to California to bring his beloved Steinway piano home. They turn on a dime; you can haul anything. It’s not a vehicle you would want to drive around town, but you can buy this working cargo van at $47,820 out the door. 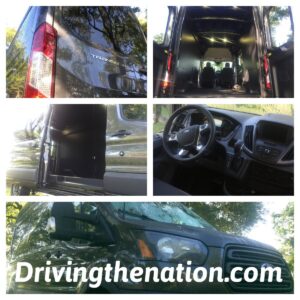