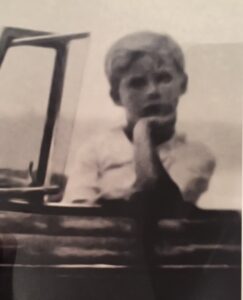 Nicola Bulgari as a boy

I am currently in Rome, Italy. Italy is a country that talks in timeframes of B.C. and A.D. I had to stop and take it in when our tour guide, Francesca, told us that the Coliseum was built in 72 A.D. Really? All that time and the Italian Government hasn’t budgeted any money to fix it up? :)

Veloce Tours, Inc. put together a driving extravaganza, and I am traveling with a dozen members of America’s Car Museum located in Tacoma, Washington. We are on a two-week trek to drive cars, visit car museums and private collections, and enjoy all that Italy has to offer.

Last night we had dinner with Mr. Nicola Bulgari, the great-grandson of Sotirios Bulgari, the founder of the Italian luxury jewelry brand Bvlgari. I’ve seen many car collections, and they are beautiful, but some of the collectors trade their cars like they are baseball cards; others trade them for financial gain. Mr. Bulgari is the consummate collector for the passion and love of the automobile.

For most of the evening I sat with the gentlemen that work on Bulgari’s cars; Teddy, Sergio, Marcello, Kris, and Alfredo. If you want to know the mark of a man, talk to the people that work for him. They talked about Bulgari and his cars, and his passion for those cars. To add to the description of passion, they told me that Bulgari doesn’t sell his cars, and he doesn’t talk about which cars are worth the most in monetary terms. If he did tell you that one was worth a lot it would be the first car in his collection, a 1939 Buick that he bought in 1946 when he was five years old. The second might be the Buick convertible, the first Vatican car he saw on the road.

The guys told me that you could count on your hands the number of cars that have been sold from the collection. More importantly, they were familiar with the history, the provenance of each vehicle, the people that owned the cars before him, and how the cars were maintained.

Nicola ended up at our table, talking about the cars and I asked him why American cars? He could collect anything, why American cars? He was emphatic; a one-syllable word became three syllables, because “these cars had been FOR-GOT-TEN.” Bulgari thinks Americans have emotionally undervalued the importance of their own heritage. He’s right, but fortunately, Nicola kept that memory from his younger years burning in his heart, and he has created one of the most impressive American car collections in Europe.

I asked him who his favorite designer was and he said (former General Motor’s chief designer) Ed Welburn, “He’s my favorite friend.” I looked at him, straightened my back, and said: “He’s my favorite friend.” Without hesitation, he picked up his phone and called Ed. It’s those moments that are just absolute fun. By the time I handed the phone back to Nicola, Ed Welburn and I had set a date to visit Bulgari’s collection in Allentown, PA. That should make for a good story, eh?

Welburn was as emphatic about his friendship with Bulgari as Bulgari was about Welburn, “He is one of my dearest, closest friends. He has an appreciation for American automobiles that no one else has. I have learned so much from him about autos and about true friendship.”

A couple of tips for you:

You can apply for a grant from RPM if you are interested in automotive Restoration, Preservation, and Mentoring. RPM wants to help you if you have a program for educating and teaching young people the specialized skills and knowledge needed to maintain cars.

If you want Italian wine shipped from Italy to the USA, Tesori dell’ Umbria will ship for free in May and June 2017. You can look online, but email Francesco at [email protected] to get the shipping deal. If you plan to visit Italy, the store is a few steps away from the Basilica of St. Francis of Assisi, in Assisi.

Oh, and you know that phrase “through rose-colored glasses”? Who knew that they were really talking about a glass of Italian red wine; try the Brunello, Frescobaldi, Chianti Rufino. Delightful. 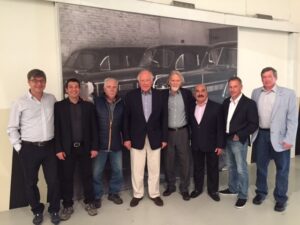 Nicola Bulgari with his workers