Fashion week for car, aka New York Auto Show, is over. Fast and furious, the show had a bit of something for everyone. More SUVs, performance cars, and clean air – green – cars were in the mix.

This is quintessential New York – I’m walking out of Hotel Eventi, where I’m staying, waiting for a car and a guy walks by me. I say out loud, that looks like Chris Barron and he turns and smiles. Chris is the lead singer for the Spin Doctors, but his Father, Ken Gross, is a very good friend of mine as well. Ken is in the Automotive Hall of Fame, the longest auto writer for Playboy, and works with Jay Leno. That is so New York!

I didn’t get to attend the Spin Doctors show, but I attended the Lexus LS 500 F-sport party and the Toyota party where they showed a FT4X concept which they say they’re not going to produce, but from all the great press you know they will – think Honda Element meets Toyota FJ. 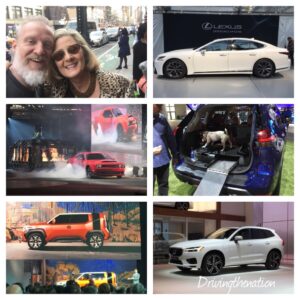