Space is precious. We buy homes by the square foot, the more square feet in a home, the more expensive the home. Space is so important in a car that if a car manufacturer can find one extra inch of interior room in a car, they will send out a press release. Some companies have put smaller fuel tanks in their cars to give the consumer more interior, or cargo, room. Putting a hydrogen fuel cell in a car takes up a lot of room. Putting a hydrogen fuel cell tank in a big-rig truck makes all the sense in the world. 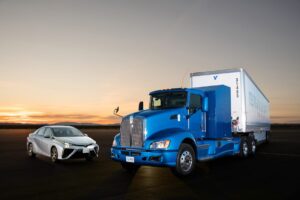 A quick call to the Port of Los Angeles, CA told me that there were somewhere around 20,000 drayage trucks at the port. We did the math and figured out that one Drayage truck’s CO2 emissions is equal to 22 units of Passenger vehicle. Think about this, if you can change one drayage truck’s emissions it is equal to twenty-two cars of emissions! If you change them all, it is like putting 440,000 zero emission vehicles (ZEV) on the road. On average, a Drayage Truck CO2 emission is 60 tons per year. Any argument you use, the math proves that this is a good idea for reducing emissions.

It’s a brilliant application for many reasons, “As they did with the Prius and the Mirai, Toyota is taking a leap into the future of technology. By bringing this heavy duty, zero emission hydrogen fuel-cell proof of concept truck to the Port, Toyota has planted a flag that we hope many others will follow,” said Mary D. Nichols, Chair, California Air Resources Board (CARB). “CARB will be following the progress of this feasibility study with interest, as we look to develop the best mix of regulations and incentives to rapidly expand the market for the cleanest, most efficient big trucks to meet the need for dramatic change in the freight sector.”

CARB and the Port of Los Angeles will work with Toyota on a feasibility “Project Portal,” the heavy duty truck project that will begin this summer in the Port of Los Angeles and Long Beach, CA. Currently, the diesel powered trucks move an average of 19,000 cargo containers in and out of the ports each day. This is precious cargo, retail merchandise that fuels the GDP of America. We will not get rid of trucks, but we can get rid of their emissions.

Diesel-fueled Drayage trucks are the behind the scenes way you get the products you buy from the ocean carriers to the retail stores. Those same trucks are the number one source of greenhouse gas emissions and one of the highest sources of criteria pollutants (like NOx, SOx and DPM) according to Christopher Cannon, director of environmental management for the Port of Los Angeles, “If we can find ways to continue to reduce emissions from those vehicles as well as lower those vehicles carbon footprint, we think we will really accomplish something.”

It’s a long-term concept; from a well-to-wheel, CARB has already legislated that hydrogen has to be partially produced from renewable sources, making the hydrogen even cleaner.

Hydrogen is already produced for use in the refinement of oil into gasoline. The beauty of using hydrogen at the port, besides meeting CARB requirements, is that there is plenty of hydrogen in Southern California. Heavy duty trucks create a high percentage of emissions. There would be less rush to create a hydrogen highway if the filling stations were purposefully placed where the fuel cell vehicles resided. 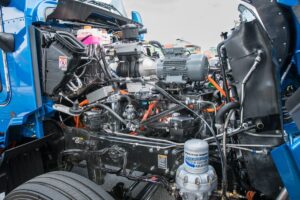 Toyota used two fuel cell stacks to convert a fully functioning Kenworth heavy duty truck to run on hydrogen to produce 670 horsepower and 1,325 lb.-ft of torque. The 12kWh battery is the same battery Toyota uses in the Toyota Mirai. These Zero Emission Vehicles will conduct port drayage operations while emitting nothing but water vapor. Refill of the fuel cell with hydrogen is 20 minutes, and its estimated driving range is more than 200 miles per fill, under normal drayage operation.

“Toyota believes that hydrogen fuel cell technology has tremendous potential to become the powertrain of the future,” said TMNA Executive Vice President Bob Carter. “From creating one of the world’s first mass-market fuel cell vehicles to introducing fuel cell buses in Japan, Toyota is a leader in expanding the use of versatile and scalable zero-emission technology. With Project Portal, we’re proud to help explore the societal benefits of a true zero-emission heavy-duty truck platform.”

Toyota created a video that shows the 35,000 pound Portal Project concept drag racing against a 35,000-pound diesel truck with the hydrogen truck finishing in 8.7 seconds while it took the diesel drayage truck 14.6 seconds. It was a drag race of massive proportions, showing the low-end torque and instant thrust off the line usually associated with diesel. 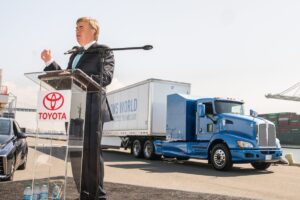 Toyota’s Bob Carter at the Port of Los Angeles

Project Portal is just one part of Toyota’s ongoing commitment to fuel cell technology and the potential of a hydrogen society. It follows on the company’s continued work to expand California’s hydrogen refueling infrastructure, including the recently announced partnership with Shell to increase the number of hydrogen refueling stations in the state.

“Hydrogen fuel cell vehicles play a role in California’s efforts to achieve greenhouse gas emission reduction goals, improve air quality, and reduce our reliance on fossil fuels,” said Janea A. Scott, Commissioner, California Energy Commission. “That’s why the California Energy Commission is investing in the refueling infrastructure needed to support adoption of these vehicles. The Commission applauds Toyota for putting this cutting edge technology to use in a heavy-duty freight proof of concept. This demo will show how fuel cells can help support the heavy-duty sector’s efforts to increase efficiency, a transition to zero-emission technologies, and increase competitiveness.” 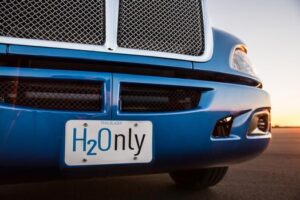