The fight between SCRAMP and the County Administrator Offices is heating up. Both Roger Penske and Mario Andretti have sent letters of support to the Monterey County Board of Supervisors. The letter below shows that SCRAMP was taken by surprise. This is looking like an inside job, the question is from which group?

SCRAMP was notified by the County of Monterey Assistant County Administrative Officer (ACAO) Dewayne Woods that “the County is now in negotiations with another proposer for management services at Laguna Seca Recreational Area.” SCRAMP says Woods didn’t notify them until after the proposal was on the docket for Tuesday night. Is that a normal processor was the Administrative Office doing something untoward?

A quick search on the internet has me scratching my head. Yes, it makes sense that A & D Narigi, a hospitality group, would be interested in controlling Laguna Seca. Narigi would need to bring in vastly experienced operators of Laguna Seca. The question is, would any of the people that have left recently be willing to return to their post? Key members are saying yes, they would.

In one article I found that Narigi is supposedly leaving Monterey for Washington. It was the same article that applauded Mr. Narigi for being one of the supporters and board members for Rancho Cielo, a youth-camp that is a vision of John Phillips, a retired Judge, and current Board member. Will Phillips vote, or is that a conflict of interest?

Geet your popcorn ready, Tuesday will be quite an interesting meeting for the right to run Laguna Seca.

The letter from SCRAMP starts here:

The fate of the SCRAMP organization and an agreement to continue to operate the Laguna Seca Raceway is in the hands of five publicly elected officials, the Monterey County Board of Supervisors.

Despite what the County Administrator Offices may believe or want you to believe, it is the Supervisors who make the final decision, and they will do that on Tuesday, November 19, during the Supervisors’ public meeting.

This section of the meeting that includes the vote on the Laguna Seca Raceway management organization selection is scheduled to start at 10:30 am. For those able to attend, we suggest arriving by 10:00 am.

We were not formally informed of the Raceway management decision being included in this meeting by Monterey County, and it wasn’t until the agenda was listed on the County website yesterday that we learned of the vote being scheduled.

We need your support!

SCRAMP – An experienced, structured organization with motorsports experience, institutional knowledge and a passion for what they do, is supported by hundreds of dedicated volunteers and community organizations. An organization that over the 62-year history of the track has funded over $50 million in improvements to Laguna Seca Raceway, including the original paving of the circuit. An organization that has a proven performance record with race sanctioning organizations, race teams, and race participants, and also understands the fans passion and the legacy that Laguna Seca Raceway has provide for generations of attendees. A 501c4 organization that was founded in 1956 whose mission is; “SCRAMP is dedicated to bringing world-class racing events to the Monterey Peninsula, benefiting our race fans, sponsors, charitable organizations and our community as a whole.”

A & D NARIGI – headed by a former hotel general manager who publically announced at the time of his recent retirement that he has sold his home in Salinas and is moving his family back to Seattle. No known automotive or motorsport experience. Understood to be supported and/or directed by the Assistant County Administrative Officer. A key member of the Narigi team is understood to be a former Laguna Seca Sr. VP Event and CEO who lead SCRAMP during its most troubling organizational and financial period, resulting in SCRAMP losing its long-time Concession agreement, replaced by the current restrictive management agreement as well as the irretrievable transfer of intellectual property including the track name, logos, and other images and likenesses from SCRAMP to the County. 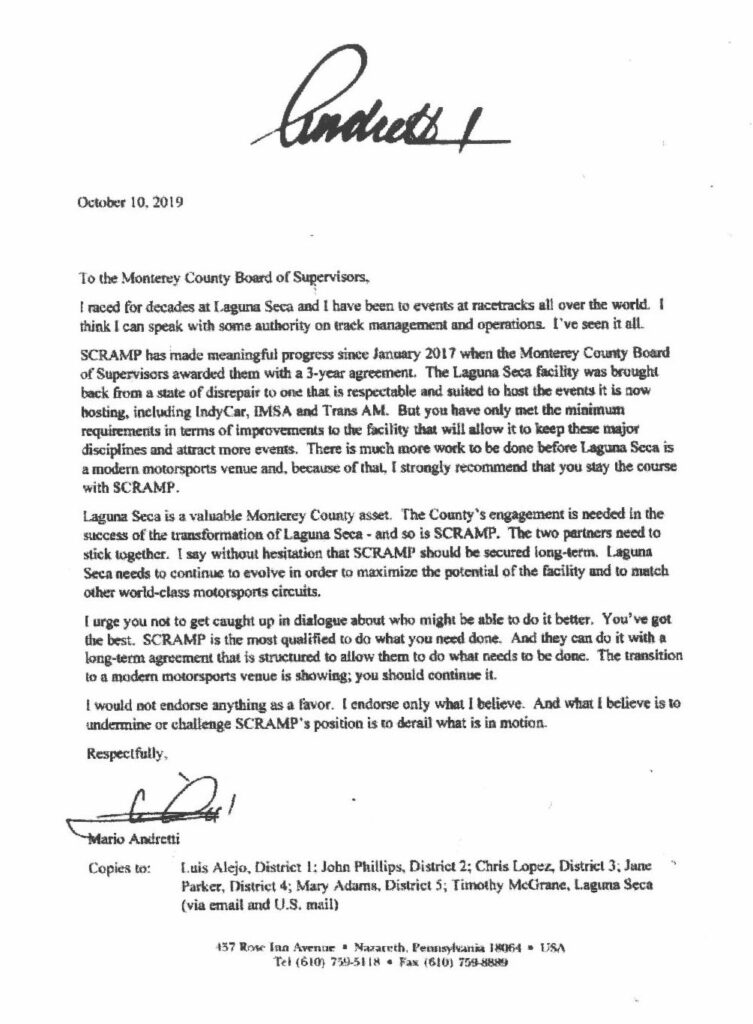 Letter of support for SCRAMP from Mario Andretti

Board of Supervisors Meeting 11/19 to support SCRAMP

Action: We are calling on all supporters of SCRAMP to attend the Board of Supervisors meeting to share opinions and support of SCRAMP’s continued operational management of Laguna Seca Raceway.

Where: Monterey County Government Center, Board of Supervisors Chambers,