The Petersen Automotive Museum partnered with Volkswagen to present a brand-new exhibit that showcases the design and construction of the vehicles of tomorrow. Open to the public on Wednesday, November 20, 2019, “Building an Electric Future” explores the manufacturer’s plans to become the foremost producer of electric vehicles through three all-electric ID. series cars such as the ID. 3 compact car, ID. R race car and ID. Vizzion autonomous car.

Located in the Production Gallery, “Building an Electric Future” consists of five rooms that incorporate interactive features and showcase how Volkswagen’s MEB modular electric vehicle platform is engineered and how ID. electric vehicles are assembled. 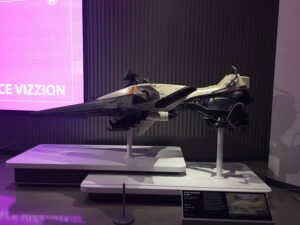 The sparrow at the Petersen Museum in Los Angeles, CA

“Through our partnership with Volkswagen, we are exploring the impact an electrified future will have on a local and global scale,” said Petersen Executive Director Terry L. Karges. “We are thrilled to collaborate with the manufacturer to present ‘Building an Electric Future.’ The exhibit offers visitors an interactive behind-the-scenes look at how the world’s largest automaker is paving the way for the future of mobility.”

The opening reception of the exhibit on November 19, 2019, welcomed media and Volkswagen impresarios to the Petersen for the global unveiling of the new ID. Space Vizzion, a wagon of tomorrow that combines the aerodynamic characteristics of a GT car with the spaciousness of an SUV. The concept vehicle will be on display to the public at the LA Auto Show at the Los Angeles Convention Center from November 22 to December 1, 2019. 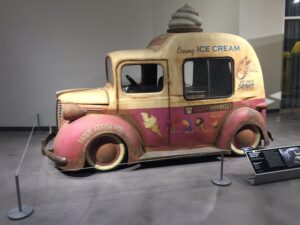 So adorable at the Petersen Museum Los Angeles, CA