POVA identifies used vehicles that represent excellent value for consumers based on future resale retention. POVAs recognize the pre-owned model year 2014 vehicles across 27 segments available for resale in 2016 that is expected to retain the highest percentage of their value over the next three years. The awards will be presented to automakers this week at the New York International Auto Show.

Truecar’s press release listed the results, Toyota’s top ranking among Mainstream brands is no surprise as it led the field with seven awards across both car and truck segments with vehicles including the popular Camry sedan, recently discontinued FJ Cruiser utility vehicle and segment-leading Tacoma midsize pickup. The Tacoma was also one of four award winners to win a 2015 ALG Residual Value Award for the 2016 model year, which recognizes vehicles that retain the highest percentage of their Manufacturer’s Suggested Retail Price (MSRP) after a three-year period. Toyota’s full-size Sequoia utility vehicle also received both awards.

The other vehicles to win both awards are the Mercedes Sprinter van and the Mini Cooper Hardtop compact car.

Ford and Hyundai were each honored with three awards. Ford was the leader among truck segments with the F-150 full-size pickup, Edge crossover utility, and Transit Connect van. Hyundai’s Tucson crossover, Equus premium full-size sedan and Genesis sedan were each top performers in their respective categories. 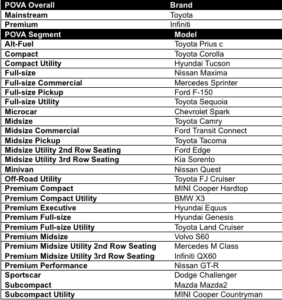