Presidential cars on the National Mall

It’s free and open to the public! The Historic Vehicle Association (HVA) will feature its second Cars at the Capital exhibition on the National Mall in Washington, DC. A couple of iconic presidential automobiles will be on display; President Taft’s 1909 White Steam Car, the first White House limousine; and the 1962 Willys ‘Jeep’ CJ-6 President Reagan used at the Reagan Ranch in California.

Each of the vehicles will be displayed on the National Mall for approximately one week in a “glass jewel box” on the pathway between the National Air & Space Museum and the National Gallery of Art from April 14 to April 26. The exhibition follows the widely acclaimed 2014 Cars at the Capital show that brought eleven historically significant automobiles to the National Mall. 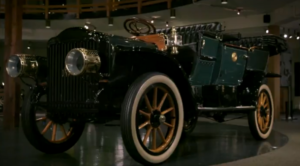 The 1909 White Model “M” Steam Car was used to transport William Howard Taft. Taft was America’s first President and the first to use a fleet of automobiles for regular transportation. President Taft’s enthusiasm helped promote the early adoption of the automobile in America. The first Presidential automotive fleet comprised of a 1909 White Steam Car, two gasoline-powered Pierce-Arrows, and a 1909 Baker electric.

The second vehicle is President Ronald Reagan’s 1962 Willys Jeep CJ-6. President Reagan used this Jeep around Rancho del Cielo (the Reagan Ranch) just north of Santa Barbara, CA. It was purchased in 1963 as a Christmas present from Nancy Reagan to her husband, Ronald Reagan. This largely unrestored Willys Jeep CJ-6 was the most used and beloved of several jeeps owned by the President.