At the Washington Auto Show ‎Executive Vice President at American Honda, John Mendel talked about how much money Honda has spent trying to track down the owner of each Honda to ensure that every Honda on the road that was part of the Takata airbag recall knew to get their car new airbags.

Mendel said one of Honda’s proposals was that the Department of Motor Vehicle has a database of recalls for each make and model and unless the owner could show that the car was fixed that the car wouldn’t be registered.

Lovell assured me, more than once, that Liberty Mutual does not give its information to anyone, including CarProof or the DMV. He also assured me that a person would not lose their insurance if they didn’t get the car fixed, “renewal is unrelated to this campaign. This recall notification is a value-added service to our customers.”

I have had people ask me how they could find out if there was a recall on their car.

* as many as one-third (31 percent) of car owners have received a recall notification about their vehicle.

* 62 percent of those surveyed believe it’s the manufacturer’s responsibility to notify them if their call has been recalled. In many cases; however, car owners are often unable to be informed by the auto manufacturers as they’ve either changed addresses or the vehicle has changed ownership. (Honda said that was their biggest issue, finding the owner of the car)

* The overwhelming majority of Americans (91 percent) reported they would find it valuable if someone proactively notified them that their vehicle has been recalled.

* Despite increasing odds that car owners will receive a recall notification at some point during their ownership, 14 percent of Americans question whether their car manufacturer could even contact them in the event of a recall. 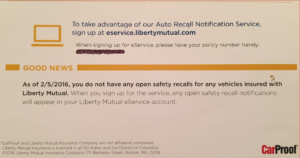 Reported Behavior in the Event of a Recall

* The overwhelming majority of Americans (95 percent) say they would take action if their car was recalled, with over two-thirds (67 percent) saying they’d act within one week, if not immediately.

* Upon learning that a car is recalled after it is sold directly to another individual, 28 percent of Americans would not alert the buyer that the vehicle was recalled.

* The majority of Americans (90-92 percent) would contact their dealership for a repair if notified about a car recall pertaining to a faulty accelerator, malfunctioning airbags, steering issues, wiring or wheel problems that result in fire or accident, and parking gear issues.

* But 21 percent would not follow-up on windshield wipers that fail to operate properly—a potential driving hazard when driving in inclement weather.

Chris Martin, Automobile Public Relations, American Honda Motor Co., Inc., likes the idea, “Honda welcomes all efforts to encourage owners of recalled vehicles to get their vehicles repaired as soon as possible. This initiative offers the opportunity for vehicle owners to receive that encouragement from another trusted source with likely access to current contact information.”