A remote key fob is akin to the remote for your television set; believe it or not, there are people that still get up to change the channel on their television, and there are still people that use a key to open their car door. There are also people that have remote key fobs that want them to work further away from the car than the key fob does. Continental and Honda are listening to them.

Through a system called Bidirectional Long Range Communications (BLRC) System a driver can use a remote control key fob from up to a third of a mile away – or 600 meters – to start the engine, activate climate controls and receive status feedback (such as locked/unlocked) at performance levels previously thought to be unattainable. An owner can now connect with a vehicle at 20 times the range of traditional remote-access systems to utilize security and convenience functions, as well as many others, based on car company preferences.

Continental, a leading international automotive supplier, and Honda R&D Americas, Inc. were presented with a 2016 Automotive News PACE (Premier Automotive Suppliers’ Contribution to Excellence) Innovation Partnership Award for their benchmark collaboration during the development of the Bidirectional Long Range Communications (BLRC) System. The BLRC was a 2016 PACE Awards program finalist, marking the eighth consecutive year the company has had an entry named as an award finalist and its second consecutive Innovation Partnership Award.

The Innovation Partnership Award was presented to Continental and Honda during the annual PACE Awards ceremony held Monday, April 11, 2016, at the Max M. & Marjorie S. Fisher Music Center in Detroit for the outstanding and important level of collaboration between the Original Equipment Manufacturer (OEM) customer and supplier.

“We are proud the PACE Awards judges have chosen our collaboration with Honda for this prestigious recognition,” said Jeff Klei, President of Continental North America. “Our close partnership fostered the development of innovative solutions to the challenges of providing safe and reliable bidirectional communication across significant distances, ultimately enhancing customer satisfaction and enabling OEM differentiation.”

“Building a successful partnership like the one forged with Continental does not happen overnight,” said Frank Paluch, President of Honda R&D Americas, Inc. “It takes time, trust, teamwork, and a singular goal – to deliver a product that provides great value to our customers. It is an honor to be recognized by the PACE award committee for this innovative collaboration.”

Continental and Honda worked together to develop these features using proprietary advanced technology consisting of a remote control key fob with optical feedback, powered by a single standard coin cell, and an innovative vehicle-mounted transceiver. The strong partnership enabled the development of several unique BLRC System solutions, such as having the key fob utilize a newly developed battery concept that does not require charging. It maintains a two-year battery life by transferring energy from the coin cell to a rechargeable battery, buffering the peak currents necessary for the radio transmissions.

The innovative BLRC System made its market debut on the Acura MDX in 2013 and was quickly followed by the Acura TLX and RLX in 2014.

Last year, Continental was honored with two PACE Awards for its Bare Die High-Density-Interconnect (BD-HDI) Printed Circuit Board Substrate Technology for Transmission Electronics and its Multi-application Unified Sensor Element (MUSE), as well as an Innovation Partnership Award with Audi AG. 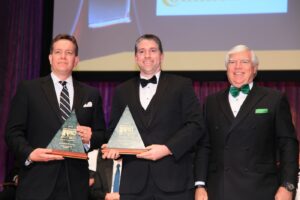