The Summit had over 5,000 registered guests. Initially, the entire automotive Summit was going to be in Detroit, Michigan. The Pandemic mandated the event go virtual. In a twist of fate, the virtual meeting created more demand; the registration went from 500 to 5,000, 60% of the registrants were from the USA, 30% from Europe, and 10% from Asia.

In a year where nothing has been natural, it was delightful to see four of the best car designers of our time chatting about cars and design, riffing off each other.

It’s all about that human touch – creating during COVID

In a world where the majority of car purchases are impulse buys, a good car designer is even more important. How do designers take impulse buying into account?

In the middle of COVID-19, more purchases are being made online than ever before. Buying online is no longer something someone does while watching QVC or home shopping network when they’ve had too much to drink. That’s easy if you’re purchasing a well-known brand Dutch oven to make sourdough bread, but what if you’re buying a car? Impulse car purchases still need to be seen and touched.

As Dave Marek said, “you have to make a pretty enough car that will entice someone to want to get in the car and drive it.”

I asked each designer; previous to COVID-19, each of you were hopping from continent to continent to meet with your designers. Has COVID-19 changed that, and do you see this changing design by the designer?

COVID-19 has changed the way all car designers for all car manufacturers do business. What are some of the biggest challenges for creating in-house with other artists? Marek described how he went from getting on an airplane every week to creating the car in one place, milling a rendition of it, and sending it to China or Japan. The designers make adjustments, do more milling, and send the car back to the USA for further study. “It’s almost like we’ve learned how to streamline it, but there is no way you can create a car without looking at it.”

Sielaff’s team is gathered closer together in Crewe, UK, but even then, with Zoom, “it is all work. You need to have momentum in the studio, a creative flow. There is no ability to have a jam session on zoom. This is where I am getting concerned.”

Smith made the point that “without having relationships with people before the Pandemic, I think it would be impossible.”

Fisker is the CEO and designer for Fisker Automotive, “I’m such a proponent of seeing the design in person, of having a clay model. We’re lucky because we only have one design center. We had just signed off on our design before COVID started. A take away for me is that you can do so much of the design without traveling, but you just innovate better when you are together with other people.”

Safety is inherent in a car, but most people don’t realize that there are over 3,600 safety regulations by the National Highway Traffic Safety Administration (NHTSA) that designers create a car around. Consumers should not have to know NHTSA standards if the car companies are doing their job. Safety is not about thinking that a designer has the most stylish car design in the world, and NHTSA is screwing it up. It’s about not getting in an accident in the first place and then being safe if you are in an accident. Part of the key for an impressive design is to wrap the coveted designs from the past into today’s safety and technology.

Considering all the above, how much do the designers have to think about when designing a new car? Does design matter as much if a car is autonomous?

From yesteryear to today

Does the interior technology mean more than exterior design? In the ’70s and ’80s, young people were buying station wagons and vans and tearing out the inside, and creating the proverbial Woodstock cars complete with a place to sleep or party. Today we have 35 feet RVs rolling down the highway with a shower, toilet, and king bed. People are giving up their homes and buying RVs, and taking to the road of freedom. Entertainment in vehicles has always been a selling point.

A few of the points that came across the clearest were: 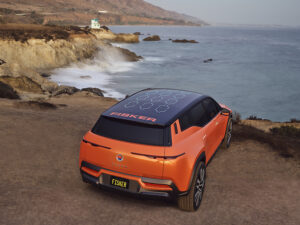 Cadillac’s Andrew Smith mentioned that in this time of COVID, marketing a brand new car is going to be a lot more complicated than refreshing a car that is already out on the market. This is especially poignant for Henrik Fisker, who will be coming to market with his first electric SUV, the Ocean.

Sustainability is a big deal for the future. Not just the obvious fuel economy, or electric car versus gasoline, but finding new ways to produce cars out of different, more sustainable materials.
Power-to-weight-ratio is a major consideration. As batteries become a bigger part of the car, so will weight. While 3-D is popular for its lightness, the designers see most 3-D parts being part of the inside of the car.
The most significant design distinction because of COVID-19 will be in vehicles built for ride-sharing. Will there be plexiglass between passengers like there is between the customer and driver today? 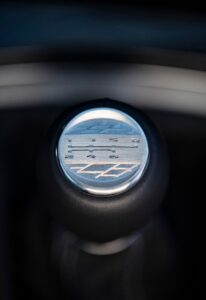 The V-Series Blackwing models will be the first GM production vehicles with 3D-printed parts, including a unique medallion on the manual shifter knob.

Another question was, with impulse buying being one of the highest reasons for vehicle purchases, how do you design for impulse buying?

Henrik said it was amazing how easily so many people have adapted to buying online. In fact, “All of our orders are coming from online.”

Andrew Smith acknowledges that the car is one of the most expensive purchases you will ever make and, “just seeing a vehicle driving down the road can seal a deal for me.” Marek noted that you can send a pair of shoes back fairly easily, but sending a car back is more difficult. Research online is becoming more important.

At the same time that the world was shutting down at the beginning of the year, Bentley was recreating coachbuilding with 12 Bacalar limited-edition vehicles. Each customer invested 1.5 million pounds per car. Amazingly, without seeing them, all twelve cars were sold within one week. 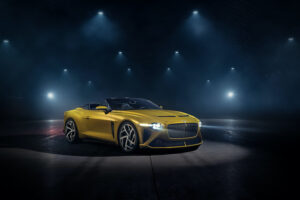 Both Fisker and Sielaff made the point, while Smith and Marek nodded in agreement, that the one thing that can’t be visualized on a screen is size. You can’t tell how big the vehicle is by looking at it on a piece of paper or in a commercial.

Perhaps the most poignant question is what Marek asked, “if you’re not driving, what is the experience you get?” The differentiating factor, as Fisker pointed out, is a fusion of software and design. Fisker believes that you will see more radical designs in the future once we hit the autonomous freeway. 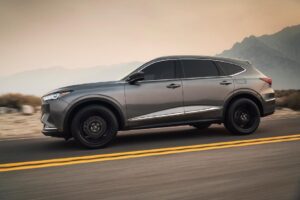 Cadillac’s Supercruise is changing how GM designs the interior and how a relaxed posture may change the way drivers touch controls.

Sielaff was the first to bring up the car’s weight because, certainly, that plays a major role in the design of the car. Weight and sustainability are becoming big players in the design arena. My favorite quote was from Fisker, “just because you can make a purse out of something sustainable, doesn’t mean you can create a seat out of it that you can sit on for 100,000 miles.”

Consumers are already learning to talk to Artificial Intelligence versus a real person. Expanding talking to AI instead of a real person in a car is made easier because of this. Harman Kardon is working on a seamless transfer of entertainment from your home to your smartphone to your car.

There is also legislation that will undoubtedly have an impact on the development and evolution of autonomous design. The car designers will have to wait to see how much that affects the creation of future cars.

The car designers also talked about how sustainability will impact design and how the scent or lack of scent plays a role in creating a car. There are certain smells you don’t want to smell when you slip into a car seat. How do you use certain products and keep the smell out of the car?

In the last ten years, a new phenomenon is building a brand for the haves, and the have nots. When Hyundai brought out Genesis, the marketing was luxury for people who didn’t need to show off. How do ultra-luxury carmakers create in a world where some people are downplaying their wealth?

The future of car design is more intricate than a couple of lines on a piece of paper. The number of people, organizations, and intuition it takes to produce a car of the future takes a designer that can weave all these aspects into the future of design.

And the winner is…

The student car designer that won the award was Ankit Ukil. 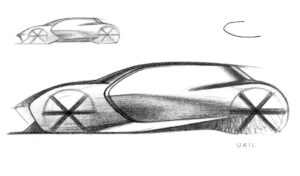 The student car designer that won the award was Ankit Ukil.