Harman’s Executive Vice President of Lifestyle Audio Michael Mauser owns a Samsung phone. We’re standing in front a Jeep. What do a vehicle and a smartphone have in common? Harman Kardon microphones and speakers.

Mauser says that the new parent company, Samsung Electronics Co., Ltd., doesn’t have plans to merge the two companies. We’re talking as we walk up to the building where all the new technology is housed. As we walk up the lane I see the well-known names of Harman Kardon subsidiaries; Harman Kardon, Becker, JBL, Crown Audio, dbx, DigiTech, Martin Professional, AKG Acoustics, Lexicon, Infinity, Mark Levinson, Revel, Bang & Olufsen. These are names I know from driving cars with sound systems, some of the same names are audio systems in households today.

When you think about it, Harman is doing the same thing auto makers do; they put the best technology in the most expensive cars, and as the technology is amortized it is allowed to trickle down to the less expensive vehicles. Mauser’s group is working on creating a connected life to the connected car as technology becomes standard in more cars. They have unveiled nine products, including Allure with Alexa, Invoke with Cortana, and JBL Link range with Google Assistant at the 2017 IFA in Berlin, Germany. They are the number one portable audio brand worldwide, and they have received 42 design awards in the past 12 months. 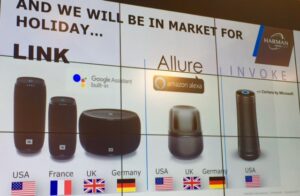 Allure with Alexa, Invoke with Cortana, and JBL Link range with Google Assistant at the 2017 IFA in Berlin, Germany

As we walk through the door I turn to Mauser, “this is what you see as a vision, this is your strategy isn’t it? To be able to leave your car and go into your home and the music you were listening to doesn’t miss a beat in either place.” Mauser picks up, “It is the vision, the commitment of Harman, to connect the people to a rich audio lifestyle experience.”

Unlike Google and Apple, we are not building a car

It would be a natural to compare Samsung/Harman to Google and Apple and ask if they are building their own cars. Mauser was emphatic in saying they were definitely not thinking of building a car.

I would compare Harman to the software giant Nvidia instead. Nvidia is agnostic when doing business, and so is Harman. Harman has a multitude of businesses to pull from depending on the level of quality and content the car company wants to put in the car. In fact, Mauser sees software as a way to upgrade through apps, instead of hardware in your vehicle.

With the purchase of Harman Samsung is playing in the major leagues with the big boys when it comes to the connected car; Continental, Bosch, Delphi, MELCO (Mitsubishi Electric Corporation) and LG. All of these companies are more than able to supply parts for electrified and/or autonomous vehicles. None of them have the expertise of music, speakers, and microphones interacting seamlessly with the quality that Harman has created. Harman owns 45% of the automotive consumer market share. And once electrification and automated driving are accepted people are going to have nothing but time on their hands and listening to music, and playing videos are going to be a couple of things that people will migrate to since they don’t have to drive.

The second video Mauser is talking about how long before automated cars will be on the road and how long before the connected lifestyle is seamlessly integrated into our society. Let’s get connected.