Fan: I’ve been following you for years.

Scott: Well, I’ve been around for years

Scott Pruett is the oldest most successful race car driver on the national circuit in American sports car racing history. At 57, Pruett is currently racing as part of the International Motor Sports Association’s top series, driving No. 15 Lexus RC F GT3 for Lexus Motorsports. In June 2017 he was inducted into The Motorsports Hall of Fame in Daytona Beach, Fla., and the West Coast Stock Car Hall of Fame in Phoenix, AZ. One of Pruett’s favorite moments was with Al Unser Jr, “Little Al,” in the Michigan 500 race.

At the charity gala, sponsored by Lexus of Sacramento, Pruett proudly says hello to his parents, who are in the audience, and then talks about his career. Pruett raced in IndyCar and NASCAR’s Cup series. He’s one of the few drivers to compete in both the Indianapolis 500, earning Rookie of the Year in 1989 and the Daytona 500 during his career. At the charity event, he talked about some of his most memorable races including the ones he won, lost, and when he barely walked away.

Pruett knows he is blessed and says he wouldn’t be in the business today if he weren’t winning and healthy. His teammates, Sage Karam (22 years-old) and Jack Hawksworth (26 years-old) are about the same age as his kids, but Pruett gets the street cred he deserves. I have talked to other young racecar drivers Joey Hand and Josef Newgarden, and there is nothing but respect for Pruett. In some ways, they are following in his footsteps of what made him successful off the track, engaging with his fans. Pruett talked about the number of time drivers spent doing publicity events. Which brings us to the charity event in Sacramento, a charity event honoring the hometown boy made good.

With this in mind, Scott, a Sixth generation Californian, was the guest of honor at the California Auto Museum. The Museum is less than an hour from where Pruett started racing, in Lodi, California. Guests enjoyed stories of almost fifty years of racing and participated in an auction to raise funds for school buses to bring children to the museum.

While Pruett may tell you he is where he is today because he is blessed it is also because he works hard. Pruett and his wife, Judy, write children’s books, they own a winery, Pruett Vineyard, that received a 96-point rating on a 2014 Sierra Foothills Championship Cuvee Syrah. They are as hands-on with their businesses as they are with their children. While most well-to-do people just send their child to school and pay for their lunch, Pruett’s kid worked at the lunchroom during lunch with other kids. I know this because I live in the same small town, Auburn, as the Pruetts and people talk. In this case, the story was from a woman who had a child at the same school as Pruett, but her child wouldn’t work in the lunchroom because the child thought it was beneath them. Judy attended the Friends of Placer High School meetings and knew how much it cost to have outside activities for children. 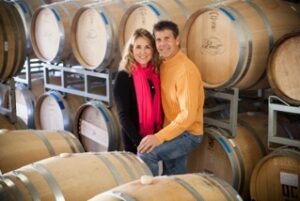 The gala raised money so that children could be bused to the auto museum to participate in the programs Cal Auto Museum has created from the second grade on up. There is even a tour for visual impairments or learning disabilities to share in the experiences.

Judy Pruett knows that it cost about $500 for a bus to take children on a field trip,”low-income schools don’t have that kind of money and it is the largest expense for a field trip.”

The Pruetts have created a blessed life for themselves, and Northern California is benefitting from a family that pays it forward.