Shell Eco-marathon the Superbowl of fuel-efficiency

In the United States, the Superbowl is the culmination of a year of team rivalry in football. An entire year of contentiousness culminates in that one game that is watched by millions. Even people who don’t watch football, watch the Superbowl. Some of them watch it for the commercials. Millions and millions of dollars are spent on commercials for the SuperBowl. The most famous commercial of all is the one that started in 1987 when Phil Simms was asked what he was going to do now that he had won the Superbowl, and he exclaimed, “I’m going to go to DisneyWorld.” When the San Francisco 49ers, a West Coast team, won Joe Montana yelled, “I’m going to go to Disneyland.” Disney paid Simms $85,000 to yell that phrase on the field after the win.

High Schools and Colleges spend millions on football. The whole school and alumnae come out to watch eleven young men busting heads together in the name of school patriotism.

The goal, it is said, is to teach children how to work and play together. But maybe, just maybe, we are evolving as a species, and maybe schools and companies will put some of that money behind teams that are putting their brainpower together to win the ultimate prize, especially if that prize is for the betterment of the Universe.

Over 700 high schools and colleges globally applied this year to become part of the Shell Eco-marathon. Over 10,000 students, in fifty-three countries, vying to create a car using alternative energy, get it on the track and compete for the title of the most fuel-efficient cars in the world. With only about 450 schools allowed, the rules were strictly adhered to, knocking one group out of the running when their brakes failed to work, sending students home frustrated, determined to come back next year. 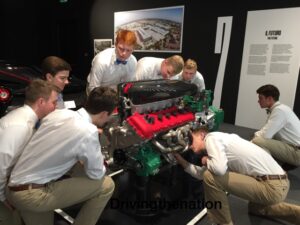 Unlike the Superbowl, where anyone can go to Disneyland, the ultimate prize when your team wins a place on the podium of the Shell Eco-marathon is a trip to Maranello, Italy, racing around the Fiorano race track with Marc Gene, best known as a tester for Williams and Ferrari in Formula One. Formula 1 race car driver Kimi Raikkonen happens to drop by to see what’s going on and sits in your car!

How did the Shell Eco-marathon start?

During dinner with the Shell Eco-marathon General Manager, Norman Koch, I ask him that very question. Koch is passionate about the Eco-marathon, it’s past, present and what he sees for the future, “We have a long passionate history in Engineering, and we love challenges. In 1939 it was just two geeks, two petrolheads that wanted to see who could go further on a gallon of fuel. They just wanted to compete for fuel-efficiency, just like other people compete for time. The competition carried on, even thru the war years, and in 1985 we made it a student competition. Shell is not an authority in car building, so we thought, let the bright minds of the future think about that challenge.”

“We see this challenge as a way to inspire and to pursue this career in a meaningful way. Not just sitting in class writing papers, but getting hands-on achievement, to deal with the two scarcities; time and money. As an engineer, you never had either of these two to spare.”

Whether you need to go very fast, or very fast efficiently, the design for an engineer is the same; you have to optimize to a parameter. The awareness for the student is what parameter am I working on when creating and what are the available resources and cost of usage?

“The test is real, there is a hard stop date, and if your entry isn’t detailed enough, if you’re not far enough along in December on your drawings that you would be ready in May then you won’t be chosen. This stop date gives the students an experience of how real life works. Some teenagers have gone on to work with car companies, including Tesla’s electric engineering department.”

A quick search on Linkedin for Shell Eco-Marathon pulls up 539 people with that keyword on their resume. Some of these people currently work for Tesla, Ford, ArcelorMittal-Automotive R&D, and other car companies. The Shell Eco-Marathon is a coveted accolade on these resumes. It is so coveted that engineering schools, such as La Joliverie Polytech Nantes an engineering School in Nantes, France created a course just for the Eco-Marathon. 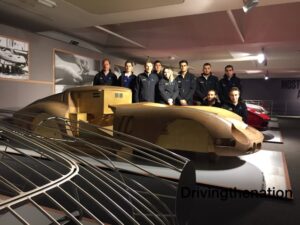 It is important to realize that this growth of the future will be lead by technological improvements. We can’t know what, or which, technology or energy is going to lead in the next 20-30 years. Koch knows that Shell has been around for 100 years. He feels that the Eco-Marathon will help Shell see the way to the future energies.

It’s also about having choices, about energies competing against each other. Norman ponders the question of which energy Shell has learned the most about, “We are only providing the platform for others to experiment on for this event. It’s not learning about fuel; it is about which energy is more looked into academia. We have learned that the interest in hydrogen has grown quite significantly in the last five to six years. It was a tiny category before that time. We now have about fifty teams worldwide out of 450 working on hydrogen.

According to Norman creating an Electric-fueled vehicle is the easiest, “Hydrogen is the most complex energy-vehicle to create technologically, so the fact that we now have about 10% of the group looking at hydrogen shows me that this is a fuel that is not to be underestimated for it’s potential and advantages.

Would you pay $20 a gallon for gasoline?

Why does Shell have the Eco-marathon? Why do they care about fuel-efficiency when their goal should be to sell as much energy as possible for the most money possible?

Once an energy becomes scarce, the price of that energy will go up. If you are used to spending $3.00 a gallon, and your car goes 20 miles on that gallon it costs about 15 cents a mile. If that gallon of energy goes up to $20 a gallon, it is going to be financially prohibitive unless that gallon of energy can somehow go further. The energy efficiency can’t be furthered, but can the students of today combine vehicles and energy of tomorrow to produce more miles from one gallon of energy? That is the challenge.

Of the three teams that won, one was electric, the other diesel and another was fuel-cell hydrogen.

The Knights Three from Alden-Conger High School placed 2nd on the podium in the DWC Americas Regional final and finished in the top 3 in the first DWC race in London in 2017. The team won the title by achieving 457.26 mpg (miles per US gallon) in diesel.

La Joliverie Polytech Nantes from Nantes, France placed 1st on the podium in the DWC Europe Regional final with the hydrogen UrbanConcept vehicle as their energy. The team won the title by achieving 241.4 km/m3 (miles/ cubic meter of Hydrogen).

There were no television crews at the finish line asking each team where they were going to go after the win, but if there had been I could see them screaming at the top of their lungs, Dude, We’re going to Italy!

This is the second year that the prize has been a trip to Maranello, Italy, home of Scuderia Ferrari. It’s the stuff that dreams are made of, a journey that most of these young people won’t even be able to comprehend how exclusive it is till they are in their forties (because that is when most of us have the money to take a proper vacation, and money can’t buy this trip).

Past just going to Italy, past going to the house of Ferrari, these students got to take their cars around the world-famous Fiorano Circuit, the Official Ferrari Test Track. They spent time with Ferrari tester, Marc Gene. They got to meet Kimi Raikkonen. The first-place winners, Saint Thomas, got to work with the Formula 1 composite engineers where they will receive advice on how to improve their cars for next year’s Eco-Marathon.

This is United Airline’s first year sponsoring the children’s airfare to Maranello, Italy. United Airlines’ David Oppenheim, Managing Director, Global Accounts, said they partnered with Shell on this event because they saw this as a good cause. Once David was here he got the bug, just by being with the kids. A self-described non-auto enthusiast, engineer undergrad, “seeing children being exposed to engineering at a high school level is something that I wouldn’t have dreamed of when I was in school. I knew what engineering was, but I never got to experience it till I was in college.”

United Airlines has started working in electric and hybrid vehicles to go beyond, to be more sustainable, so these students are right where they need to be for a future with United Airlines as well. 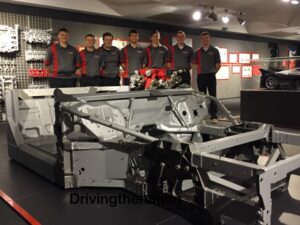 Alden-Conger High School The team won the title by achieving 457.26 mpg (miles per US gallon) in diesel.

This started a discussion between the Shell executive and the United executive about how much times have changed in school for engineers, what the expectation was then and is now. Expectations in engineering were all about performance, or weight, or design, but the energy was always an afterthought. Now the thought when creating is the cost of usage. Power usage back in the day was not in the discussion when those two went to school, but nowadays with everything from smartphones to cars requiring power, power usage is one of the parameters set in the equation.

It’s easy to see why Shell continues this competition, and why they continue to create different parameters for the event. The key will be to see if more companies understand the significance of making this team competition as important as Shell does.

Shell is investing a significant amount of money annually that pits schools against each other, competing for the ultimate prize, and instead of busting heads open, they are opening student’s minds to solve the problems of tomorrow. It’s a competition called Shell Eco-marathon.