Thirteen-year-old Charlie from Loma Verde was in the hydrogen Linde booth at the STEM tent. The tent was set up for the children from schools all over Northern California at the Shell Eco-Marathon to make the future event. I was listening to Charlie talks to the Linde hydrogen representative, “You can’t get hydrogen from the air,” that is correct the rep said. I was intrigued. I asked him where he would get hydrogen from, water he said. I explained that water was precious in California so that probably wasn’t a good idea. Dirty water he replied. I told him that we water the ground with dirty water. What about agriculture waste, cow farts (because all kids like to say the fart, right?). Charlie looked at me and said, yes, methane. Seriously!, a thirteen-year-old gets it! We are doing something right.

Phil owns Longhorn Meats, and like his Daddy, before him, he knows how to cut a piece of meat. His business has grown so much that he’s added a cutting room to his little store in Auburn, CA. He’s also looking at running cows on a ranch, but he’s getting a little kickback from the powers that be because of all the methane the cows create in the emission-ridden Northern California. Worry no more, my friend. Let those cows burp and pass gas all they want. The Charlies of the world are finding solutions, and so is Toyota and Shell. We spoke to Doug Murtha group vice president of corporate strategy and planning for Toyota Motor Sales (TMS), USA, Inc. after he participated in the “Infrastructure for the Mobility Revolution” panel in San Francisco at the Shell Powering Progress Together Powering technology for alternative renewable fuels.

Toyota created a hydrogen drayage truck that is used at the Port of Los Angeles, CA. A Drayage truck’s CO2 emissions are equal to 22 units of Passenger vehicle. The way one gets hydrogen is equally as important as creating alternative vehicles. That is why Toyota is building the World’s First Megawatt-scale 100% Renewable Power and Hydrogen Generation Station – yes, Charlie, out of agricultural waste.

It’s a net-net agreement that allows the Tri-Gen facility to use bio-waste sourced from California agricultural waste to generate water, electricity, and hydrogen. The power generation facility will be 100% renewable, supplying Toyota Logistics Services’ (TLS) operations at the Port and making them the first Toyota facility in North America to use 100% renewable power. Tri-Gen will generate approximately 2.35 megawatts of electricity and 1.2 tons of hydrogen per day, enough to power the equivalent of about 2,350 average-sized homes and meet the daily driving needs of nearly 1,500 vehicles.

With the help of the US Department of Energy and other agencies, FuelCell Energy developed Tri-Gens core technology. The facility exceeds California’s strict air quality standards and advances the overall goals of the California Air Resources Board, the California Energy Commission, and the Air Quality Management Districts of the South Coast and the Bay Area, who have been leaders in the work to reduce emissions and improve air quality.

What doesn’t happen is that Toyota doesn’t get the light-vehicle duty zero-emission credits they would receive if they produced 22 fuel cell vehicles. Even though the Port of Los Angeles and Long Beach has one of the worse air emission conditions in California, the California Air Resources Board (CARB) doesn’t give credits to Toyota for creating a hydrogen drayage truck. 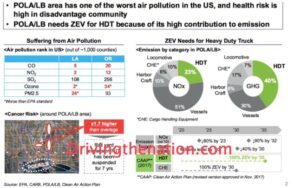 I spoke with CARB, and they explained that the Zero Emissions Vehicle (ZEV) mandate is only for passenger cars and light trucks – i.e., light-duty vehicles. If a car company creates ZEV drayage trucks, they don’t get credit for the amount of ZEV cars that would equal.

The ZEV credit has a specific requirement for – or credits from – manufacturers in the heavy-duty sector. CARB gave me the example, “there have been hydrogen fuel cell buses running in the Bay Area for years, and increasing numbers of electric buses (and some fuel cell buses) elsewhere in the state. These also are not generating ZEV credits for the light-duty manufacturers who are under the ZEV mandate.”

I understand the difference, but I think it hampers creative ways to decrease emissions when no credits are given just because it’s a new venture in a different sector, especially when the companies are using renewable energies. 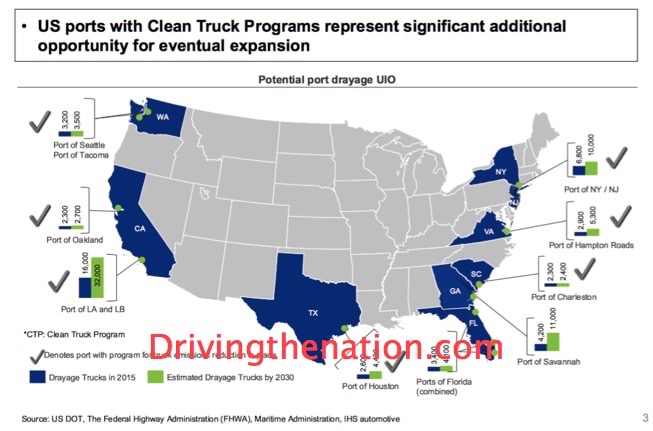 Just a couple of days ago Toyota announced that Equilon Enterprises LLC, doing business as Shell Oil Products US (“Shell”), and Toyota have been provisionally awarded $8 million by the California Energy Commission (CEC) to develop the first hydrogen-truck refueling station at the Port of Long Beach.

The funding, which is contingent upon the approval of the project at an upcoming CEC meeting, forms part of the CEC’s Alternative and Renewable Fuel and Vehicle Technology Program, which helps develop hydrogen and electric infrastructure at ports, warehousing and distribution centers in California.

Shell and Toyota expect the facility to encourage the use of zero-emission hydrogen fuel cell electric trucks in and around Long Beach, one of the world’s largest freight hubs.