I was on CNBC’s “Kudlow and Company” with Anne Stevens, Chief Operating Officer, The Americas, Executive Vice President, Ford Motor Company, and Kudlow asked if there ought to be mandated for ethanol. I replied yes. After I got off the show, I realized that Kudlow meant for automobiles, but I meant for oil companies.

You see, oil companies pretty much have a monopoly on where you get your gas. You hear this called “the infrastructure” when people are talking about changing over to an alternative fuel or hydrogen, the sticking point is “the infrastructure.” ADM, VeraSun, and Aventine, the top three producers of ethanol, can produce all the ethanol they want, but without corner gas stations that have E85 filling stations, “the infrastructure” isn’t there.

On January 31, 2006, President Bush gave his 2006 state of the union speech. The part of the speech about energy/ethanol is contained below (in italics), as well as a definition of some of the alternative energy sources President Bush was talking about in his speech. This speech is not the first President to say we should get off the dependence on foreign oil. Every President since Nixon has stated that we need to get the dependence on foreign oil. All they do is throw a smidgen of money behind the problem and leave us with the problem. There is a way to get out of this problem.

Back in the late 70s, The National Highway Traffic Safety Administration (NHTSA) ordered automobile makers to find ways to increase their Corporate Average Fuel Economy (CAFE). The goal was to make America less dependent on foreign oil. The most obvious way of doing this was to increase the miles per gallon a car could get. Or at least NHTSA thought so. All one has to do is look at the sprawl of suburbia, and NHTSA’s numbers, you can see that we haven’t decreased the amount of fuel we are using.

There are two proven ways to reduce the use of imported oil; raise the price of gasoline per gallon and produce our own oil.

Raising the price of gas for any political pundit would be political suicide. Producing our own oil has slowly gained attention. If McCain and Kerry were serious about CAFEs’ goal, they would submit a mandate to get E85 at the corner gas station. Ethanol is homegrown and allows us to use 85 percent less foreign oil. If you spend $50 on gasoline to fill up your tank, on a well-to-wheel basis, that $50 starts in the middle east and goes to the oil company and into your tank. If you spend $50 on E85 blend $42.50 (85%) of that money starts on a farm, goes to the producers here in the states and ends up in your tank. All $42.50 stays in the United States.

President Bush: Keeping America competitive requires affordable energy. And here we have a serious problem: America is addicted to oil, which is often imported from unstable parts of the world.

The best way to break this addiction is through technology. Since 2001, we have spent nearly $10 billion to develop cleaner, cheaper and more reliable alternative energy sources. And we are on the threshold of incredible advances.

So tonight I announce the Advanced Energy Initiative — a 22 percent increase in clean-energy research at the Department of Energy to push for breakthroughs in two vital areas. To change how we power our homes and offices, we will invest more in zero-emission coal-fired plants; revolutionary solar and wind technologies; and clean, safe nuclear energy.

President Bush: We must also change how we power our automobiles.

We will increase our research in better batteries for hybrid and electric cars and in pollution-free cars that run on hydrogen.

We will also fund additional research in cutting-edge methods of producing ethanol, not just from corn but from wood chips and stalks or switchgrass.

Our goal is to make this new kind of ethanol practical and competitive within six years.

President Bush: Breakthroughs on this and other new technologies will help us reach another great goal: to replace more than 75 percent of our oil imports from the Middle East by 2025.

By applying the talent and technology of America, this country can dramatically improve our environment, move beyond a petroleum-based economy and make our dependence on Middle Eastern oil a thing of the past.

There are many terms floating around when it comes to renewable energies and alternative energies. Here are some of the most popular.

What is a flex-fuel vehicle (FFV)?

FFVs can use either gasoline or E85 alternative fuel. There are over 5 million FFVs on the road today. Most of the flex-fuel vehicles in America are produced by General Motors and Ford Motor Company.

Ethanol stemmed from the low price of corn. Farmers were going broke trying to make a living selling a full field of maize. The farmers got together and found another revenue stream. The farmer’s coalition
has thirteen ethanol plants, processing corn into something that is worth more than corn. This income stream is known as ethanol. In 2004, the entire U.S. ethanol industry produced and sold 3.5 billion gallons of ethanol in the United States. The top five ethanol-producing states are Iowa, Illinois, Nebraska, and South Dakota and Minnesota. According to John Urbanchuk, a consultant with lecg.com, “in 2004, the production of ethanol created almost 125,000 jobs and put an additional $3.9 billion into the pockets of American consumers this year. An estimated 30 percent of all gasoline used in the United States was blended with ethanol in 2004. In the 70s our dependence more than doubled. With ethanol, we are slowing the growth rate. Ethanol supports rural economies. It provides jobs and increases the Gross Domestic Product (GDP). Henry Ford’s first car engine was designed by Diesel and was intended to be powered by ethanol.”

E85 is a renewable, domestically produced alternative fuel composed of 85 percent ethanol and 15 percent gasoline. The fuel is derived from corn and is a clean alternative to petroleum-based fuels. One bushel of corn makes almost 3 gallons of ethanol. E85 can substantially reduce greenhouse gas emissions from automobiles when compared to using gasoline. E85 can only be used in FFVs. In January 2006 General Motors started a “Live Green Go Yellow” initiative that symbolized the greenness of the fuel and yellow from corn. Ford has said they will have an additional 250,000 FFVs, and GM will have 400,000 extra FFVs on the road soon.

E10 is a blend of 10 percent ethanol and 90 percent gasoline. One can safely use gas in a vehicle that contains up to 10% ethanol, in fact, all gasoline sold in California has at least a 5.7 percent mixture of ethanol and all gasoline sold in Minnesota has a 10 percent mix. According to Monty Shaw, spokesperson for Renewable Energy, “America uses 125 billion gallons of gas a year for vehicles. If we converted all gas for vehicles to E10, we would need 12.5 billion gallons less of imported gas every year. Ethanol pushes the price of corn up and reduces subsidies paid by the government, based on the price of corn. We are being phased in overtime. This is giving us time to get the industry up to capacity.” 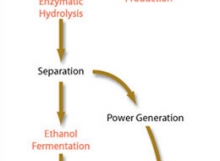 Another revenue stream for farmers could be their corn stalks. Iogen Corporation of Ottawa has developed a process that allows enzymes to break down the non-food portion of corn stalk, wheat stalk wood chips, stalk termed as “cellulose,” into ethanol on a commercial scale. Cellulose ethanol and conventional (grain derived) ethanol are however the same final product, just made a different way, from various parts of the product.

What is biodiesel and what are SME and RME?

Biodiesel is an alternative, renewable fuel that can be made from a variety of plant-based and other feedstocks. Through a well-known chemical process called transesterification, biodiesel is separated from vegetable oil – primarily from soybeans in the U.S. – and refined, creating a biodegradable, non-toxic fuel.

The use of biodiesel reduces emissions of unburned hydrocarbons, carbon monoxide, and particulate matter. More importantly, biodiesel can also serve as a supplement or replacement for conventional petroleum-based diesel. It offers enhanced lubricity and cetane, plus similar horsepower and torque when compared to petroleum diesel. Because plant-based feedstock crops absorb CO2 as they grow, the life cycle of biodiesel fuel can be up to 85% CO2 neutral.

What are the current blend levels of biodiesel in the US?