At the Frankfurt Auto Show (IAA) there will be many World Premieres of cars from many manufacturers. Before those cars can be built, each car company has to decide what technology will go into the car of the future. Watching the technology that the auto suppliers bring out will give you an idea of the future of mobility.

The following technology will be shown at the 2017 Frankfurt Auto Show (IAA). It will be interesting to see which of these technologies end up in the cars of the future.

The ultimate in travel has always been considered a chauffeured limousine. We mere mortals watch television as the rich and famous waltz right out of their hotel straight into a waiting car, wave to their adoring fans, and are whisked away. Pictures show the freedom and privacy of the groups laughing, kissing, and drinking, all while someone else is driving. There are men in suits conducting business in the back of the limo with the darkened glass wall between them and the driver. All of this is happening while the masses are commuting to work, usually one-person per car.

Continental AG described their driving initiative, “In Berlin, for example, approximately 3.5 million citizens spend an average of 70 minutes a day in traffic – and this includes all the modes of transport used, including public transport. In everyday Berlin life, the car is simply a little-used short-haul vehicle, one that is parked for most of the time. During a trip, an average of 1.3 persons sits in the car. The average daily distance traveled by a Berlin citizen in traffic – distributed over an average of three trips a day – is a total of 20.2 kilometers. On-call, driverless Robo-taxis would be an ideal solution for this mobility behavior, if the result was much less individual traffic in the city.”

It’s not that people don’t want to drive, but there is a big difference between the dream of driving through the countryside, convertible down, the air in your hair, and a commute that takes two hours and goes a lot less than the sixty-five miles per hour stated on the speed sign.

For example, Continental AG reported that the current average speed in London was only 7.8 miles per hour in 2016. It’s the reason so many people are taking the bus, subway, or ridesharing.

Many people are concerned about emissions as well. Many companies are working on autonomous cars and electric vehicles. Some car companies are investing in car-sharing companies. Continental AG believes that “The future of individual mobility in cities is autonomous and electric, and it will become part of the sharing economy.”

The demand and desire are becoming an increasing reality in tomorrow’s car mobility. That is why Continental AG is unveiling the Continental Urban mobility Experience (CUbe) Robo-taxi. Through the complete product portfolio of its own sensors, actuators, control units and communication, and networking technology Continental AG will start testing the CUbe this year.

“Among the many practical topics we are currently exploring are the adequate design of redundant brake systems and the optimal composition of the sensor platform for a Robo-taxi,” says Dr. Andree Hohm, Head of the Self-Driving Car project at Continental. Hohm is convinced that Robo-taxis offers a smart solution to meet the challenges of urban mobility for cities that are increasingly choking on the current form of private transport.

The CUBe is a dedicated driverless vehicle. It looks like a box on the outside, but look closer. Continental AG acquired the chassis and installed some of its newest technology in it; radar sensors on each corner for a 360-degree view used to identify obstacles. In the front there are two stereo cameras with lenses, just like eyes, to detect an object and spatial displacement.

We go inside, and there are no pedals and no steering wheel. There is equipment upfront that looks like a soundboard to make music, but it is the equipment that captures all the information that is being provided by the sensors, the brains of the machine.

There is a lot of discussion between the OEMs and car companies because they both see a change in the market towards driverless cars. Each company is trying to figure out what the role is for them in this new world. 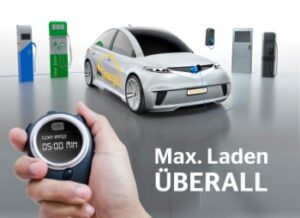 Many of the car companies used the standard charging unit for their plug-in hybrids and electric cars, but there are different charging units and different levels of charging. How does your car know what unit to charge? Do all the charging companies upgrade as all cars get higher density batteries?

What about if your car had a Universal charger?

Continental AG showcased its all-new charging system at the Frankfurt auto show (IAA). This charging technology transforms the electric powertrain into a universal charger at charging stations equipped with different technologies. Imagine, being able to drive up to any charging station and recharge your vehicle battery without having to worry about which kind of charging technology the station is equipped with because your car has a bidirectional system. Through this system, you will be to charge a vehicle to the maximum charging capacity of up to 800 volts and up to 350 kilowatts in the future.

The approach taken by Continental’s engineers is actually incredibly simple. Rather than cramming the car with extra technology to match all the different types of charging stations, they have instead turned the powertrain itself into a full-blown charging system. To do so, they drew on the powertrain’s existing components, utilizing the fact that AC/DC switching at different voltages is already an inherent feature of the electric powertrain. Whatever is consumed, the car will know how to convert it to the Continental DC booster.

The bi-directional charging means that if necessary, the vehicle can provide up to 230V for external electrical devices ranging from laptops to a refrigerator. The ability to charge a unit from your car is what I call 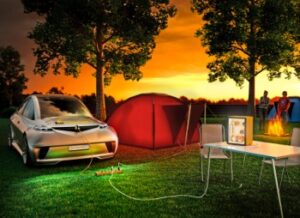 Have you heard of Glamping? Luxury camping? My favorite technology from Continental was the CAMPING all-charge. The all-charge EV stations that can be charged AC-DC or DC-DC or become a generator for your home, but what is really cool is the ability to energize a refrigerator, or TV, through your car. I call it CAMPING – (C)ontinental AMPING. Get it? The car we were shown had a charging unit in the front where the DC booster was housed, and another unit in the back where we could hook up our refrigerator. 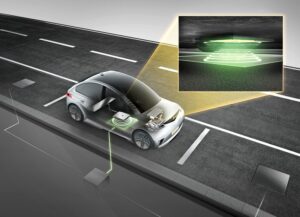 Plugless charging is further in the future, but the future is closer than we think. Think about this, you go to a restaurant in your electric car, pull up in the EV charging slot and instead of getting out and plugging in you lock your car and go inside.

Half the issue with gassing up your car is getting out of your car and plugging the hose in; whether it is gas or electricity. It’s cold; it’s raining, it’s dark, you have groceries or children in your car. You’re distracted, and you’re tired, and you forget. The next morning you come out, and there isn’t enough energy to get you to work.

Just like more public places are offering free wifi if you patronize them, more places are offering charging stations if you shop at their store. Continental envisions that one day the plug will go away, and all you will have to do is pull up to the pad, within ten centimeters of the power transference, make sure the power recognizes your car and the car will start energizing. Inductive charging solution capable of recharging the EV at a rate of up to 11 kW. At a charging rate of 11 kW, every minute of charging time provides approximately one kilometer of driving range. “So in the space of a 20-minute shopping trip, the available driving range can be increased by up to 20 km,” says Thomas Röhrl, who is a responsible expert for the inductive charging system. This system charges the vehicle automatically and safely as soon as the car is parked in the correct position over the system’s ground pad. The vehicle-mounted inductive charging components comprise a receiver pad, power electronics, controllers and a human-machine interface to assist with precise parking. 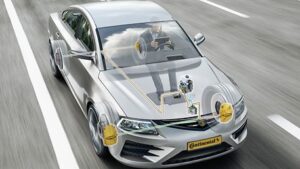 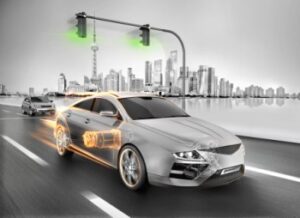 Don’t give up on diesel just yet! Just when California thought it would never see a car company bring out a clean diesel car again, Continental AG brings out the cleanest diesel yet. According to Continental AG the car I drove in Hannover, Germany had fewer emissions than the Euro 6.

Continental is taking a systems approach; injection and calibration along with a 48-volt mild-hybrid (electrified) with a start-stop generator and an electrified after-treatment that will reduce NOx emissions up to sixty percent. There is a function that allows the car to coast without fuel consumption and emissions. There is regenerative braking to recoup the energy. The limit will be 128 NOx mg/Km emissions, the car I drove tested out at 56 Nox emissions, still way below the emissions regulations of 2021.

If you wanted a lighter car all you would have to do is take out the speakers and subwoofers. The problem would be, you wouldn’t have music, and part of the reason people commute to work by themselves is that it is the one time they get to play what they want in the privacy of their car.

Continental has invented speaker-less audio systems for cars, reinventing the car audio system. Continental explained the system and the thought behind replacing the sound system in a car, “The Ac2ated Sound Continental developed was inspired by the functional principle of string instruments. Like a violin: bow and strings are the transducers, the bridge equals the transducer´s bonding to the surface which equals the instrument body. These transducers consist of a magnet and a coil, which generate micro-vibrations. However, instead of an oscillating membrane which is part of a current speaker, larger existing components and surfaces in the vehicle are excited by the transducers to radiate the sound The sound waves are generated by compact actuators, which are similar to the core of a conventional speaker.” 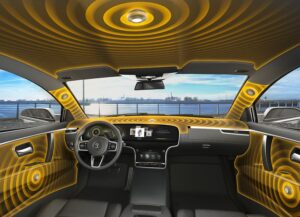 “The A-pillar is suited for high frequencies, while the door panels, for instance, have the right properties for generating medium frequencies. Similar to speaker technology, we use large components such as the roof lining or rear shelf to generate low frequencies”, Dimitrios Patsouras, director competence center NVH at Continental Engineering Services explained. To achieve a good 3D sound, conventional high-end car audio systems can easily require between ten and 20 or more speakers. Owing to a conventional speaker design this gives the system a weight of up to 15 kilograms and a total box volume of 10 to 30 liters. Continental’s speaker-less audio system can weigh as little as 1 kilogram and requires as little as 1 liter of the total box volume. “However, the main benefit is the quality of the sound. Even experts listening with a discerning ear have given us the highest praise for our invisible system’s acoustics”, Patsouras said.

As it has always been, it will continue to be necessary that a body shop has spare parts directly from the manufacturer. For example, if your headliner is damaged today you need to buy a new one from the car manufacturer as the spare part is designed to fit your specific car model. In the future, it will be the same, the spare part will be developed to fit in the car and is designed for the acoustical properties that are needed in that particular part of the vehicle.

All of these products will be shown at the 2017 Frankfurt Auto Show (IAA) in September 2017.