Questions and Answers by Analysts:

(These notes were taken while the conference was active)

Jon McNeill leaving Tesla – Elon wishes him well – Sales and Service will be reporting to Musk from now on.

Did Elon Musk say that Tesla might not be around?

No, but It’s not the car – it’s the factory, we’re going to productize the factory. IT wasn’t about the Model-T, it was about River Rouge (assembly line).

Change in the architecture of the battery pack. Pretty happy with the balance now. Elon – need to move the whole supply change in cadence, there would have to be more investments in new lines.

Probably it will exceed that next year. Will be investing in Model Y (supposedly a crossover all-electric vehicle built on the same third-generation platform as the Tesla Model 3) – aiming for a million units a year. Would love to design out the problems by Model Y. Wants to get more production out of the Fremont plant than General Motors and Toyota did.

Competitors should care about the speed of production – every 25 seconds – the 5-meter car is only .25 grandma with a walker can exceed that. car companies should start caring about the aero drag in the factory.

Challenges with Model 3 ramp, deeper levels than we would like to be, but coming out of it. Thanks, suppliers for working through/sharing the vertical challenges they’ve had with Model 3. Working to get Model 3 cars to customers as quickly as possible. If we can launch a Roadster to the Asteroid belt we can probably solve the Model 3 challenges.

I think it was Churchill that said, If you like sausages and respect the law you shouldn’t watch either being made – production is the limiting factor, even though it should be the thing we’re the best at, we got a little complacent. A huge focus has been

It has renewed my faith in humanity – our semi-automatic line is doing better than our automatic line (new lines starting in giga-factory this quarter). That constraint alleviated will give 2K to 2,500 a week.

There is no actual or passive search going on for the CEO. Plans to stay CEO for a long while. Wouldn’t mind finding someone, as design engineering is his favorite.

If we can launch a Roadster to the Asteroid belt we can probably solve the Model 3 challenges.

Considering supercapacitors? Capacitors are not going to be needed. The power to energy for trucks is less than performance vehicles. The way chemistry works are you can extract high power from Li-ion cells.

Manufacturing – building a machine to build a machine

Managerial production of Tesla versus Toyota? replacing humans?
The factory as a vertical product – Elon doesn’t think their thinking is the same as the Toyota thinking.

The day after SpaceX Falcon Heavy launched a Tesla Roadster into outer space Elon Musk is on Earth giving the World clues as to the viability of his company, Tesla Motors. In the second paragraph of the Tesla Fourth Quarter & Full Year 2017 Update Musk makes the biggest statement, “At some point in 2018, we expect to begin generating positive quarterly operating income on a sustained basis. With the planned ramp of both Model 3 and our energy storage products, our rate of revenue growth this year is poised to significantly exceed last year’s growth rate.”

Other notes of interest:

* We continue to target weekly Model 3 production rates of 2,500 by the end of Q1 and 5,000 by the end of Q2.
* As we shared previously, in order to incorporate our learnings and be capital efficient, we intend to start adding enough capacity to get
to a 10,000 unit weekly rate for Model 3 once we have first hit the 5,000 per week milestone.
* The unveiling of Tesla Semi on November 16 launched Tesla into a new product category that will have a transformative impact due to a total cost of ownership that is superior to diesel trucks. We plan to use the Tesla Semi for our own logistics by transporting Model 3 components from Gigafactory 1 to Fremont.

Our Supercharger network has seen the most significant growth yet. In 2017, 338 new locations opened for a total of 1,128
Supercharger stations globally. Between Supercharger and Destination Charging, we increased capacity by over 90%. In preparation for Model 3, we opened several large Supercharger stations along our most popular corridors, including between Los Angeles and San Francisco and between Los Angeles and Las Vegas, both of which have a customer lounge, a café, a display of our energy products and 40 charging stalls. With a continued emphasis on convenient, reliable, and ubiquitous charging, 2018 will be another big year for Tesla charging infrastructure.

The next Tesla Roadster

Also, after developing it in stealth with a very small team, we were
thrilled to surprise everyone with the next-generation Roadster. The roadster was at the genesis of Tesla, a car that proved electric vehicles can be fast, exciting and here to stay. The new Roadster takes this concept to the next level. With 0-60 mph acceleration of 1.9 seconds and a maximum speed of more than 250 mph, it will be the fastest car in the world. When that performance is combined with its 620 miles (1,000 km) of range, this supercar puts to rest any debate about the limitations of electric vehicles.

My take – Elon took his Out-of-world suit off during the Q&A and showed a little humility towards understanding the complexities of manufacturing.

Lots of kudos to the SpaceX slick landing yesterday. 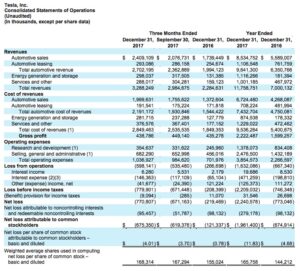 Tesla, Inc.
Consolidated Statements of Operations
(Unaudited)
(In thousands, except per share data)