The car designers of the Lincoln Aviator

The best thing to come out of that theme is the cohesiveness of the designers. Over drinks, I chatted with Kemal Curic, Xitij Mistry, and Anthony Molinari. Under the design direction of David Woodhouse, design director at Lincoln, these guys, plus Guminder Bagdal created a 3-row crossover that looks elegant on the exterior, luxurious on the interior and offers a brand new powertrain complete with a plug-in hybrid.

The Navigator has been silently sneaking up in sales, and if the first few months of sales for 2018 are an indication, it could be the best year for the Navigator in some time. The unveiling of Lincoln Aviator comes at the perfect time, and Lincoln has created a vehicle at the right time in design and powertrain.

The guys I had drinks with admire and respect each other’s work. Curic was born in Sarajevo but grew up in Germany. He is responsible for the new design of the Mustang, what is described by many as the best Mustang to date, including his colleagues Woodhouse and Mistry.

Xitij Mistry, the exterior designer, goes by the nickname, Sid, though it didn’t take long for me to call him X-man, and for the rest of the guys to join in the fun.

Anthony “Antonio” Molinari, the interior designer, is – wait for it – Italian. The quietest of the three, he comes alive when talking about design and working on the 3-row crossover with the other designers. You get a feel for the three of them through the way they joke with each other, how they talk to each other, and how they talk about work. They believe in each other, and in the work that they have created.

The next day I talked to David Woodhouse. Each designer has worked at different companies, including Woodhouse. Woodhouse graduated from the London-based Royal College of Art and had previously worked for Mini, Land Rover/Jaguar, GM, and Ford. The stars aligned and the design group was brought together to collaborate for Lincoln on the Aviator about five years ago.

Woodhouse said that the design vision is optimized on the Aviator, “you’ve seen parts of it on the interior of on the Navigator, but the Aviator encompasses the exterior and interior vision of what we set out to achieve. Everyone is dicing finer and finer in this space because this is what the customer wants, so obviously, there is a lot of energy in this space to create something special.”

The Band of Brothers

I pressed Woodhouse a little more because vehicles can have the same goal, but if the designers don’t collaborate, don’t have the same vision, an automobile can look like a car by committee, which is certain death in the market. Woodhouse used the term holistic, “it’s very important to create a vision that is going to be inspiring for a team. I think if the team doesn’t believe in the vision, you won’t get good work out of them. You’ll see work that is more random, isolated and not cohesive.”

Woodhouse described the team as a band of brothers, “it’s like a family, you have to get close, there’s a lot of stress, energy, and ups and downs and frustrations.” When I asked if there was one guy that kept everyone laughing through it all, Woodhouse gave the nod to Kemal but noted that the whole group was cohesive, inside and out.

There was also a sense of urgency because of the make or break for Lincoln, “we knew this was going to be a breakthrough for Lincoln because there were fewer restrictions on this program than we normally had to deal with. Intrinsic to that was the platform, it was the first rear-wheel-drive platform we’ve had in a very long time. That was the enabler. If you look at the proportions, the gesture Everything about this vehicle we were able to work with engineering and create what personifies the brand which is called quiet flight.”

What is quiet flight?

Four years ago Lincoln created the four tenants of the design brand; Beauty, Gliding, Human, Sanctuary are the tenants that Lincoln wanted to achieve in the Aviator. What does this mean?

Beauty – Woodhouse described the five eras of great legacy with Lincoln, the 30’s was the Zephyr, the 40’s was the Continental, the car Frank Lloyd Wright said was the most beautiful car in the world, the 50’s was the mkII, and the 61 Continental with suicide doors -all of these cars won industrial design awards. Beauty has the elegance of a ballerina, athletic strong, held with great poise and grace. The lines of the car are explained by Woodhouse using the beauty and strength of a ballerina. 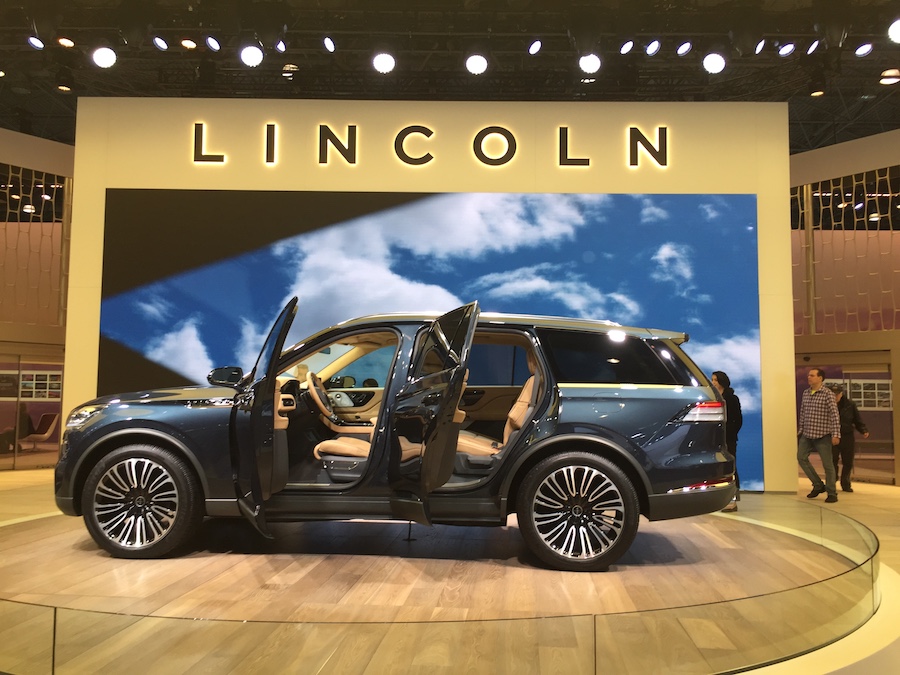 Gliding – the flight is the gesture of the car, the lines of the car are set up so that everything is falling toward the back and converging in a silhouette, forming like an airfoil, an in-flight gesture.

Sanctuary – the interior – Woodhouse likes the idea of a beautiful resort where the horizon is the waterline, reclined deck chairs. Woodhouse thinks that all humans are wired to react to certain qualities – everyone feels a sense of relaxation when they walk down to the water for the first time. The break up of the car is the horizontal, linear, and openness.

Human – how do you create an object that is humanistic, that is seductive and alluring and elegant beauty? How do you create humanistic qualities through an object? Woodhouse pointed out what he calls the moments of magic; the negative to positive aspects of the exterior, the wheel arch, the S-section of the car that looks like water moving.

If there is ever an opportunity to go vertical, diagonally, or horizontal Woodhouse says to choose horizontal, that will infuse elegance.

Poise and grace on the interior of the Aviator stray from the cockpit-style of racing and enables the warm elegance of human touch.

Woodhouse showed me that the nameplate on the driver’s side of the front quarter, where the charging unit will be for the plug-in hybrid variant of the Aviator, a much-needed variant in the 3-row SUV segment.

This was a team that had a cohesive vision, believed in it and each other and brought it to fruition. The car designer’s used the quiet flight theme that showcases their artistic design for the future of Lincoln. They have done their job. Now if they can get Misty Copeland to market the vehicle, it will be on point.