The greenest Democratic Convention ever

Convention organizers are powering the meeting with renewable energy, supplied by Constellation New Energy (a subsidiary of Constellation Energy Group, a Baltimore-based Fortune 500 national energy company). The media centers at the Convention will use renewable sources including wind, hydroelectric power, biomass, and solar energy. Each of these renewable energies emits lower levels of greenhouse gasses and displace energy derived from power plants that depend on fuel from overseas.

The Convention will also utilize a 250-kilowatt fuel cell power plant, supplied by Connecticut-based FuelCell Energy Inc to power the Democratic National Convention to be held at the Fleet Center in Boston July 26-29, 2004. Fuel Cell Energy DFC300A power plant has enough power to provide the baseload electricity requirements of a 300-room hotel. The power plant will directly convert natural gas, supplied by Keyspan Energy, into the hydrogen needed to electrochemically produce electricity. Fuel Cell Energy’s DFC power plants generate power without combustion and, due to their favorable emissions profile, are an ultra-clean product since they meet the most stringent air quality standards in the nation. The DFC300A fuel cell, combined with FuelCell Energy’s 30 other customer installations throughout the world, has generated more than 41 million kilowatt-hours of electricity.

“Being the first fuel-cell-powered Convention is just one of the ways this event will make history,” said Boston Mayor Thomas M. Menino. “We are very pleased that Boston and the Democratic National Convention will be a showcase for how environmentally sound energy policy is good for Boston and good for America.”

“The DFC power plant clearly shows the flexibility of stationary fuel cells for commercial and industrial applications,” said Herbert T. Nock, Senior Vice President of Marketing and Sales of FuelCell Energy. “We delivered, set up and started the power plant in less than two weeks. The unit is so clean it can operate in downtown Boston with no impact on air quality. And it uses half the fuel because it is twice as efficient as comparably sized power plants.”

With temperatures looming in the 80s and humidity running around 30-70 percent Boston will be feeling the heat and added congestion during the Convention. What they won’t have to be as concerned with is clean air. The DFC300A power plant produces 99.9 percent less harmful air pollution and 59 percent less carbon dioxide than traditional combustion-based fossil fuel power plants.

General Motors will be providing hybrid pickup trucks and buses to the Democratic National Convention Center. Hybrids, which get the best mileage under 25 MPG, generally known as city use, will provide a 60 percent greater fuel economy and 90 percent fewer emissions than regular transit buses. Accusations by Kerry/Edwards against the Bush government, “In President George Bush’s government, where polluters write environmental laws and oil company profit’s matter more than hard science and cold facts, protecting the government doesn’t matter at all.”

“Even though 133 million Americans already live with unhealthy air, the Bush administration bowed to energy industry lobbying and rewrote rules to allow 20,000 facilities to spew more smog, soot, and mercury in the air.”
“Even though overwhelming scientific evidence shows that global climate change is a scientific fact, this administration has rewritten government reports to hide that fact.”

“We reject the false choice between a healthy economy and a healthy environment.” Democratic Platform stance on OPEC, EPA, CAFE, energy incentives and vehicle manufacturing

So, what is Kerry/Edwards proposing for the United States if they are elected to govern us in November? According to the 41 page Democrat platform, the Democrats want;

“We support creating more energy-efficient vehicles, from today’s hybrids to tomorrow’s hydrogen cars. We support the American people’s freedom to choose whatever cars, SUVs, minivans and trucks they want, but we also believe American ingenuity is equal to the task of improving efficiency. We support improving fuel standards, and because of the challenges this poses, we will offer needed incentives for consumers to buy efficient vehicles, and for manufacturers to build them.”

“We are committed to developing hydrogen as a clean, reliable domestic source of energy. Our economy cannot convert to hydrogen overnight, so we will fund research to overcome the obstacles to hydrogen fuel and continue our other efforts to achieve energy independence.”

“Our plan begins with common sense investments to harness the natural world around us – the sun, wind, water, geothermal and biomass sources and a rich array of crops to create a new generation of affordable energy for the 21st century. By mobilizing the incredible productivity of America’s farmers, we can grow our cleaner-burning fuel. We support tax credit for private sector investment in clean air, renewable sources of energy, and we will make ethanol work better for farmers. And we will ensure that billions of gallons of renewable fuel are part of America’s energy supply while striving for strong, national renewable energy goals.”

To move beyond OPEC “We can improve our energy security in other ways. We will seek more diverse sources of oil around the world and here at home. We support the balanced development of domestic oil supplies in areas already open for exploration, like the western and the central Gulf of Mexico. We support the expansion of new infrastructure to develop supplies from non-OPEC nations like Russia, Canada, and countries in Africa. We will increase the efficiency of natural gas use, develop Alaska natural gas pipeline, and enhance our nation’s infrastructure to help supply natural gas more effectively.

“We will work to create new technology (scrubbing) for producing electricity in a better, more efficient manner. Coal accounts for more than one-half of America’s electric power generation capacity today. We believe coal must continue it’s an important role in a new energy economy while achieving high environmental standards. We will invest billions to develop and implement new, cleaner coal technology and to produce electric and hydrogen power.”
Electricity “The Federal Government is the largest single consumer of energy in the world. We will cut the federal government’s energy use and challenge local governments, corporations, universities, small businesses and hospitals to do the same.”

“We will strengthen the Clean Air Act, by controlling all of the top pollutants and offering new flexibility to industries that commit to cleaning up within that framework. We will reduce mercury emissions, smog, and acid rain, and will address the challenge of climate change with the seriousness of purpose this great challenge demands. Rather than looking at American industries only as polluters, we will work with the private sector to create partnerships that make a profit and a cleaner world for us all. At the same time, we will plug Republican-created legal loopholes and renew public enforcement of the law.”

What does all this mean? In speaking to Kerry’s staff, Kerry still wants to increase CAFE, to 37 mpg for each car manufacturer. Currently, car manufacturers have to meet 27.5 mpg for cars and 20 mpg for light trucks.

Kerry sees hydrogen coming into play in mass within 10-14 years. He wants to make a technology commitment by getting businesses involved, including venture capital. Kerry’s camp is proud that the League of Conservation endorsed him, the earliest of any candidate.

No matter which candidate, please remember to vote. 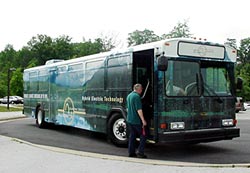 The greenest Democratic Convention ever