I promised you I would have the 2018 Toyota Camry new car review written for your viewing pleasure, and it is here. The first paragraph starts, “My husband, Stretch, owned the ugliest vehicle Toyota has ever made. Inside Toyota, the vehicle was referred to as the pig but was sold as the Chinook to the rest of us. It was a 1973 Toyota pickup with a camper. It was Stretch’s pride and joy; he could go cross-country in that vehicle. Stretch was probably the first person to use his camper as a home in Silicon Valley.”

I finally drove the Alfa Romeo Giulia Quadrifoglio RWD four-door sedan this week, and if I had $80,000, I would buy it. What a dream of a car! The handling, the engine mated to the transmission, the design, the interior. It’s a delight to drive, and I only wish I had more time in it. The price, out the door, was $79,195, the EPA estimated fuel economy was 17 city/24 highway/20 combined.

What do you think of a car without speakers? Continental AG, an auto supplier, has created a sound system without speakers. Why? Because it is lightweight, takes less electricity and can be situated in parts of the car (pillars, seats, etc.) that speakers aren’t put in today. You could use the sounds to hear music or vibrate warnings. It’s an interesting concept that will have a world premiere at the Frankfurt auto show, but you can see it here first. 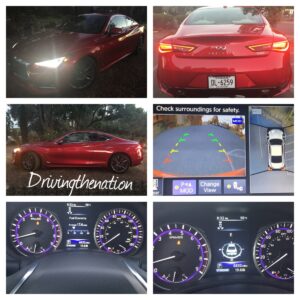