May 26, 1937, in what is known as the Battle of the Overpass, the United Auto Workers (UAW) fought with Ford Motor Company security guards at the River Rouge. Tactics have always been fierce, on both sides, when it comes to the UAW gaining access, and membership.

The UAW has been around and fought enough battles to know not to expect a company to help them become unionized. Nissan says that their non-unionized workers get about the same pay and benefits as the employees in Michigan, including a 401K package, for building the Nissan Murano sport utility vehicles, commercial vans, and Titan and Frontier pickup trucks. Workers at the Canton Mississippi plant voted nearly two to one against union representation last week. The vote was overseen by the US National Labor Relations Board (NLRB).

What is not condonable is for a Mississippi radio station to allow someone to come on their station and warn Nissan workers that they’ll go back to “picking cotton and digging ditches” if they unionize. It needs to be stressed that as far as we know, the person on the radio was NOT a Nissan employee, nor do we know if the person was part of the UAW. We hope not.

The UAW’s job is to protect its workers at all costs, even if the company employing them is having financial issues, or preparing for bankruptcy. Remember 2008-2009 job banks? When General Motors and Chrysler and Ford were in financial freefall, and the UAW had workers in a program called job banks that paid them for not working?

While the UAW is protecting the workers, there is corruption inside of the UAW. According to the union’s website, there have been fifty-five embezzlement charges, forty-three criminal charges, forty-seven guilty please, nineteen indicted, and thirty-four officials sentenced. That doesn’t include the more than $1.2 million to Al Iacobelli, who led U.S. labor relations for Fiat Chrysler Automobiles until June 2015 from the UAW-Chrysler National Training Center.

While many people think hydrogen cars have gone by the wayside or just a thing in California, Hawaii is creating a hydrogen station and buying some Toyota fuel cells.

And lastly, John Batchelor asks about Super lean gasoline in a Mazda machine. Isn’t gasoline going to be banned?

The Polish chicken and the Range Rover Evoque Convertible 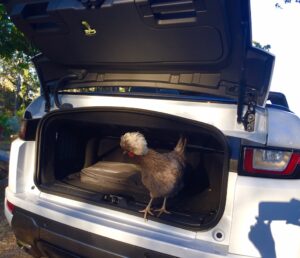