Volkswagen AG is being removed from the Dow Jones Sustainability Indices (DSJI) effective October 6. Economic, environmental and social performance are considered when being part of the ten percent of the industry leaders tracked by the DJSI. (see press release below) 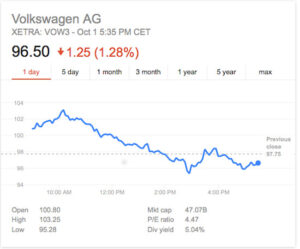 Investors are suing Volkswagen over its stock drop and, according to cleanmpg.com’s Wayne Gerdes, sales for Volkswagen were flat, “September U.S.auto sales were up 15.8 percent in September – mainly due to the Labor Day Weekend falling in September. VW sales were up 0.6 percent. VW TDI sales made up just 11.7 percent of total sales. TDI sales are normally in the low to mid-20s. Sept 2015 TDI sales compared to Sept. 2014 TDI sales were off 46.5 percent. Again with the Stop sales order issued on the 19th, it makes perfect sense.”

CARB has said that they have not certified the 2016 Volkswagen diesel models. They did not say they were not tested, but that they weren’t certified.

What about Martin Winterkorn?

Volkswagen created a software program that allowed their diesel car to spew emissions when the car was not on CARB’s dyno testing device. Air Pollution Specialist at California Air Resources Board (CARB) John Swanson, “the vehicle meets all the emissions, EPA fuel requirements and performance numbers that have been certified.” The Golf and all 2.0-liter diesel vehicles met the emission requirements and the EPA fuel economy requirements. 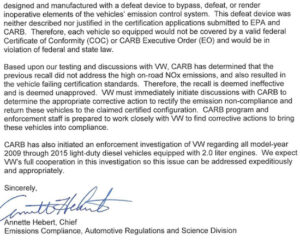 Under certain circumstances, such as steering wheel position, front wheels not turning, and barometric pressure, the diesel vehicle would switch to the “clean diesel” performance that CARB had certified them with for on-road use.

Why would Volkswagen do this?

That is the $64,000, or $18 Billion, or $30 Billion question. There is speculation that performance and durability of the engine were part of the reason, but Volkswagen has not said.

Has this happened before?

Swanson was definite, “NEVER to this extent, running completely on an alternate system with this sophisticated technology to completely mislead.”

Volkswagen AG to be Removed from the Dow Jones Sustainability Indices

Effective October 6, 2015, Volkswagen AG (VW) will be removed from the Dow Jones Sustainability Indices (DJSI). A review of VW’s standing in the DJSI was prompted by the recent revelations of manipulated emissions tests.

Per the published and publicly available methodology for the DJSI, potential problematic issues relating to any DJSI component company automatically trigger a Media & Stakeholder Analysis (MSA), which examines the extent of the respective company’s involvement and how it manages the issue. Following the MSA, the Dow Jones Sustainability Index Committee (DJSIC) reviews the issue and decides whether the company will remain in the index, based on DJSI Guidelines.

In VW’s case, the DJSIC reviewed the situation and ultimately decided to remove the Company from the DJSI World, the DJSI Europe, and all other DJSI indices. The stock will be removed after the close of trading in Frankfurt on October 5, 2015, thus making the removal effective on October 6, 2015. As a result, VW will no longer be identified as an Industry Group Leader in the “Automobiles & Components” industry group.

DJSI World Key Facts:
The Dow Jones Sustainability World Index (DJSI World) tracks the performance of the top 10% per industry of the 2,500 largest companies in the S&P Global Broad Market Index that lead their field in terms of financially material ESG factors. These 2,500 companies represent the eligible universe for the DJSI World and are assessed on an annual basis through RobecoSAM’s Corporate Sustainability Assessment.