Winterkorn – the ego and the Id

Volkswagen has admitted to deceiving the consumers and the Environmental regulatory agencies. Affected vehicles are diesel versions of the VW Jetta, Golf, Beetle and Passat, and the Audi A3.

Within the next couple of weeks, we will know more about the updates that will need to take place on each vehicle. In the meantime, Volkswagen’s stock value has taken a beating, and the fine associated with the crime is $18 Billion, or $37,500 per car.

From a string of emails with the California Air Resources Board (CARB), we have been able to put together a history of events, “We are part of a consortium with US Environmental Protection Agency (EPA) and the European Commission’s Joint Research Center. The Europeans solicited for research and International Council on Clean Transportation (ICCT), responded with a letter of commitment and in-kind support from the Air Resources Board (ARB). ICCT also contracted with West Virginia University (WVU). Their researchers worked with our engineers and scientists at the Haagen-Smit Laboratory in El Monte.”

“We met with VW on several occasions, and they continued to dispute our data, so we’d return to the lab. Over time, VW had no other explanations left, and it was our lab staff who actually got VW to admit that there was, in fact, a defeat device.”

“At this point, we’re concentrating on figuring out the scope and impact of the problem and getting the vehicles fixed. Who knew what when will come later as far as we’re concerned.”

The objective of the software cheat, known as defeat device was to achieve the oxides of nitrogen required by EPA and CARB. Better efficiency and drivability were achieved at the expense of emitting far beyond legal limits.

NOx also creates SMOG, which is a precursor to asthma. It is regulated to reduce SMOG in particular but is also a Green House Gas.

California Air Resources Board (CARB) goal is to reduce or eliminate major pollutants from all sources including transportation – automotive and shipping – power production, home, and business.

CARB was lied to by a car company. Volkswagen broke the rules and the law, and the cars are emitting up to 35 times the allowable pollutants into the atmosphere. The objective increased sales with little regard to the laws set up by this very powerful California Regulatory Agency.

1. Since these cars will not be certified as clean-diesel in California will the registered owner be able to sell the used car in California?

2. Will VW buy back these vehicles?

4. Once Volkswagen uploads the correct software, and the correct certification emission reading is on full time will there be an effect on performance?

5. Will there be punitive measures against Volkswagen?

6. Who approved the software hack that allowed the misstatement of emissions?

7. Is there a point in time that the EPA can require equipment in a car that will govern the emissions and even shut down the car when deemed unsafe? 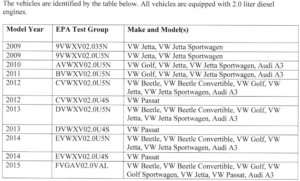 CARB shared its test results with VW on July 8, 2015. CARB also shared its results with the EPA. Several technical meetings with VW followed where VW disclosed that Gen1, Gen2 and the 2015 model-year improved SCR vehicle (known as the Gen3) had a second calibration intended to run only during certification testing. During a meeting on September 3, 2015, VW admitted to CARB and EPA staff that these vehicles were designed and manufactured with a defeat device to bypass, defeat, or render inoperative elements of the vehicles’ emission control system. This defeat device was neither described nor justified in the certification applications submitted to EPA and CARB.

Therefore, each vehicle so equipped would not be covered by a valid federal Certificate of Conformity (COC) or CARB Executive Order (EO) and would be in violation of federal and state law.

Based upon our testing and discussions with VW, CARB has determined that the previous recall did not address the high on-road NOx emissions, and also resulted in the vehicle failing certification standards. Therefore, the recall is deemed ineffective and is deemed unapproved. VW must immediately initiate discussions with CARB to determine the appropriate corrective action to recertify the emission non-compliance and return these vehicles to the claimed certified configuration. CARB program and enforcement staff is prepared to work closely with VW to find corrective actions to bring these vehicles into compliance.

CARB has also initiated an enforcement investigation of VW regarding all model-year 2009 through 2015 light-duty diesel vehicles equipped with 2.0-liter engines. We expect VW’s full cooperation in this investigation so this issue can be addressed expeditiously and appropriately.