I remember when the Volkswagen Touareg came out and my good friend, Warren Brown was mad as spit. Touareg is a group of nomadic people from the Saharan interior of North Africa, originally named Tuareg. It bothered Brown that Tuaregs were slave runners and there would be a car named after them. I had no idea of the history of the group, or the name. Since then I have been curious each time Volkswagen brings out a new car with a new odd name. Welcome the VW Tarok.

VW has creative names and meanings behind each vehicle. The Beetle was initially named the Volkswagen, Jetta is German for jet stream, Passat is German for trade winds, Golf pays homage to Gulf stream, EOS is the Greek goddess of dawn, VW CC just means comfort coupe (not sure what happened there), and the best yet is Tiguan, a combination of Tiger and Iguana. 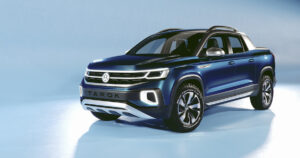 Volkswagen could be naming the SUV after the agrarian society of people in the hills and plains southeast of Plateau State, Nigeria.

The meaning of Tarok

Depending on which definition you use Tarok can mean many things; from the Urban dictionary, Tarok is an organism of great power, wit, and strength. Merriam-Webster defined the name as “an old and popular card game of central Europe played with a pack containing the 22 tarots plus 40, 52, or 56 cards equivalent to modern playing cards.”

There are games named Tarok and Tarok symbols and a link somehow to Tarot. Names.org lists a meaning from Hindu, “A submission from Canada says the name Tarok means “Shooting star, Lord Shiva” and is of Hindu origin.”

The website also made a cute anagram that Volkswagen could take advantage of;

T is for treasure, of your friendship.

A is for athleticism, embrace the competitor within

R is for romantic, hopelessly so

O is for outgoing, so sociable are you.

K is for knowledge, an avid learner

Whatever the name means, Volkswagen of America is unveiling the Tarok pickup concept for the first time in the U.S. at the New York International Auto Show (NYIAS). 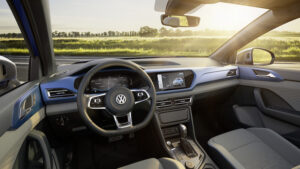 This compact unibody pickup was first seen at the Sao Paolo International Motor Show at the end of 2018 and is expected to enter production for the South American market shortly. Although there are no plans to produce the vehicle for the U.S. market, the Tarok concept is being shown to gauge market reaction for a truly versatile and compact entry-level pickup. 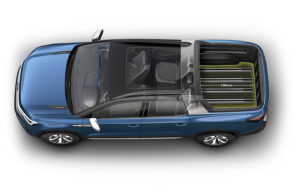 Based on the MQB platform, the Tarok concept is a compact pickup that is 193.5 inches long, yet can carry loads up to 73.2 inches in length thanks to an innovative design that allows the pickup bed to extend into the cab. 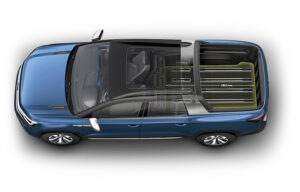 The key to the Tarok concept’s versatility is a variable load area. The floor space can be enlarged not only by opening the tailgate, but also using a newly developed mechanism for folding down the bottom of the passenger cabin’s rear panel.

The rear seats are unlocked and folded using a mechanism that is quick to operate. The back panel locks from the inside via an electrical system. A sealing device helps to ensure that the interior protects against moisture. 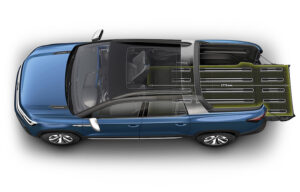 The Tarok concept design shows a close relationship with other Volkswagen SUVs, such as the Atlas and the new T-Cross. It has a tall hood, horizontal bars in the grille that run into the headlights, and LED headlights and Daytime Running Lights. Tarok also gets an underbody skid plate, and a roof and A-pillars finished in gloss black.

From the side, the most striking feature is the C-pillar that looks like the bar on a Targa top. The aluminum frame extends from one side of the vehicle to the other, covering the Tarok concept’s rear panel. The other main features are a tornado line designed as a sharp undercut above the door handles and a shoulder section that emerges above it. The 16-inch aluminum-alloy wheels come with 235/70 tires.

A continuous LED strip dominates the rear of the Tarok Concept. This wide light strip is located on the top section of the tailgate and then merges outwards into both rear lights, helping to create an unmistakable light signature at night. The tailgate itself extends right into the bumper, giving a low load height.

The interior features a fully digital design for the instruments and air conditioning control system and matches the expressive exterior in terms of style as well as color. A glass-covered 9.2-inch Infotainment system and a configurable Volkswagen Digital Cockpit are the central elements within the color-keyed instrument panel. These two elements create a continuous digital and networked cockpit, designed to help make use of a maximum range of online services and apps. Another unique feature is a speaker in the center console that can be removed and connected to a compatible smartphone via Bluetooth.

Located behind the shift lever is the 4Motion® Active Control—a multi-functional rotary knob that is used to control the all-wheel-drive functions and associated driving modes. The driver uses it to activate four higher-level modes and different pop-up menus. If drivers turn the switch to the left, they access two “Onroad” and “Snow” profiles. If the switch is turned to the right, “Offroad” (automatic setting of offroad parameters) and “Custom Offroad” (variable settings) are activated.

The 4MOTION Active Control can be used to adapt all relevant assist systems to the drive situation in seconds. The “Comfort,” “Normal,” “Sport,” “Eco” and “Individual” driving profiles, also selected via 4Motion Active Control, are also integrated. These profiles are used to customize parameters such as the throttle response, gearshift, climate control, and steering.

To demonstrate the vehicle’s off-road ability, the Tarok has an approach angle of 23.8 degrees, a departure angle of 26.4 degrees, and a break-over angle of 22.1 degrees. The minimum ground clearance is 9.6 inches. 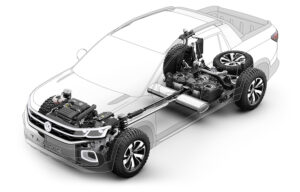 If you like this vehicle let Volkswagen know, and maybe they will bring it to the United States.

I miss your insight Warbro.