I got home Saturday from Frankfurt, Germany, turned around Monday morning to go to New York City for what was supposed to be a small party with the big unveil of the Volkswagen Passat (slight redesign on an already great gasoline car) .

By the time I got to New York the diesel was hitting the fan.

To say I’m stunned is an understatement. Disappointed. Just like at General Motors, I have grown up with these people. I have watched them create technology and cars that will be a part of our future. I have also watched them fall in love, get married and have children.

To know that any of these people that I believe make up the heart and soul of these companies is complicit in defrauding all of us makes me angry and sad.

I witnessed Michael Horn telling the group at the Passat event that they were dishonest and that they had “screwed up”.

There are reports swirling that after today Michael Horn, Audi’s R&D Ulrich Hackenberg and Porsche’s engine chief Wolfgang Hatz will be let go at a meeting of the supervisory board meeting in Germany.

Such beautiful minds, such spectacular engineering came from these people — and if they were involved, tragic. The frailty of humans.

How does this affect you, the owner of a diesel Volkswagen? I interviewed CARB’s spokesperson Dave Clegern yesterday and I have three video interviews for you: 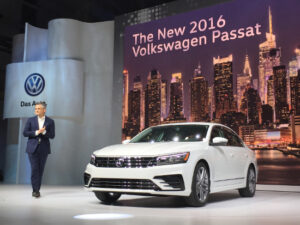