The Washington Auto Show 2018 is in full gear, and since the auto show is in Washington D.C., it is full of rules, regulations, and politics.

It was standing room only as U.S. Sen. John Thune (R-S.D.), chairman of the Senate Committee on Commerce, Science, and Transportation, convened a hearing in the Walter E. Washington Convention Center titled, “Driving Automotive Innovation and Federal Policies.”

The Senate spoke with four experts on self-driving, automotive technologies, and regulations that will need to be changed for the autonomous vehicle to come to market, first in a research and development phase, then fleet market, then onto the public market. 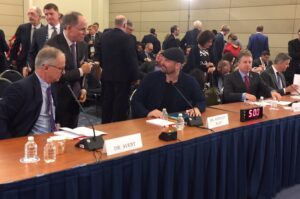 It’s a thought-provoking group that spoke with the Senate Committee on Commerce, Science, and Transportation. These four people are not only speaking for their companies, but they are also talking to the Senators, in hopes that all the Senators will understand the convergence that is happening in the auto industry. Senator Peters is hoping that all the Senators on the Senate Committee on Commerce, Science, and Transportation will vote for the Act. It’s going to be a tough go; It seemed to me that Senator Jim Inhofe Oklahoma and Senator Richard Blumenthal Connecticut seemed like the two hold-outs, but I am hoping this group was able to put some of the questions to rest without having to negotiate.

In 2011 Bosch was a $72 Billion Stiftung business, or non-profit, as it is known in Germany. Most companies this size report to stockholders, Bosch reports to itself. Many people know Bosch as a household appliance supplier, but 60 percent of Bosch’s revenue comes from original automotive equipment. Mobility is a key asset in their products.

Audi of America was the first car company to take an autonomous driving car from one State to another; from California to Las Vegas, Nevada to the Consumer Electronics Show (CES). They know the permits and requirements that were needed for each State. Sen. Dianne Feinstein, D-Calif seems to be one of the hold-outs.

Dr. Randy K. Avent is the founding president of Florida Polytechnic University, one of 12 public universities. Avent’s (A- vent) work centers on machine learning, signal processing, and dynamic probabilistic systems analysis. His role was talking about the proving grounds around the country, ten of them is what he mentioned.

The wild card was an Aussie wearing a beret-type cap. As soon as they introduced him I smiled, that was Tim Kentley-Klay, CEO, and Co-Founder, Zoox, Inc. If you want to see how incredibly brilliant Zoox’s car design is in its simplicity watch this video and you will wonder why someone else hadn’t thought of this design. After the hearing, I went up to him to introduce myself, and he said, “I remember you, you were the first person to interview me.” I knew you when…

Peters understands that there is some skepticism from people that don’t understand or haven’t had much experience with, or because they like to drive. It’s not unique to one area of the Nation; the key is exposure and making people feel safe in autonomous vehicles. The transition period is the hardest.

Interestingly, the autonomous cars companies are talking about are fully electric, so the technology driving autonomous, instant torque, etc., is available mainly in electric cars.

The questions the Senators had were good ones, Senator Blumenthal, trying not to be a “Neanderthal or Luddite” had some questions because he didn’t want to have “irrational exuberance.” Blumenthal’s example to irrational exuberance was about an ignition switch on a steering wheel, which wouldn’t happen on an autonomous level 5 vehicles since there wouldn’t be a steering wheel.

If the bill went on to the Senate floor, Senator Peters is sure that it would pass by a large majority. A date has not been set for the vote on the floor.

Avent summarized it well, “Technology is overrated in the near-term and underrated in the long-term. Adoption and trust is the challenge, more than the technology itself.” All four people agreed that around ten years is when the evolution starts.