What did you on for the fourth of July?

Stretch and I went to visit Mr. Brown. Mr. Brown is ninety-years old and has been working on Model-Ts for as long as he can remember. 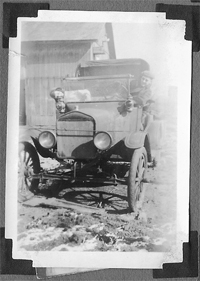 Mr. Brown’s father was the postman back in Illinois where Mr. Brown was born. Mr. Brown’s father delivered mail by horse until he could buy a Model-T to deliver the mail. He had three model-ts; one for parts, one to drive and the other to work on until the other broke. 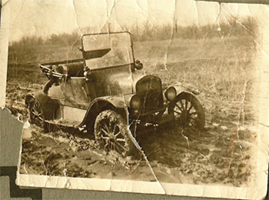 A Model A stuck in the mud

The photo with the 1920 Model-T in the mud looks ominous, but it really is two teenage boys at work. Mr. Brown’s older brother had given him a Brownie camera so he took pictures of everything he could. It had rained for days back in Illinois and Mr. Brown and his younger brother, Lowell, put some chains on his father’s Model-T and took it out on every mudhole they could find trying to get the car stuck. They finally succeeded. 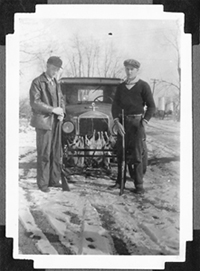 Mr. Brown’s teenage days included rabbit hunting (note the rabbit’s – tied feet up – in front of the Model-T), skinny dipping with his father and the rest of the boys and working on his Model-Ts.
The price for a drivers license in the ’30s was about $8 a year. The price for a gallon of gasoline was around 19 cents, about $2.70 in todays dollars.