What is driving America

All along I’ve been saying that Corporate Average Fuel Economy (CAFE) does not work. The CAFE Act was passed in response to the 1973-74 Arab oil embargo. The near-term goal was to double the new car fuel economy by the model year 1985. The reasoning was that if you can get more mileage out of one gallon of gas, the United States wouldn’t be so dependent on foreign oil. Just because you mandate auto manufacturers to produce vehicles that get more gas mileage doesn’t mean that the public will buy those vehicles. Consumers buy a car good in gas mileage that meets their needs. Consumers need a reason to buy vehicles that cost more but get better gas mileage. That reason is higher-priced gas. The recent rise in gas prices has proven this theory to be correct. Sales of cars have gone up as the price of gas has gone up. 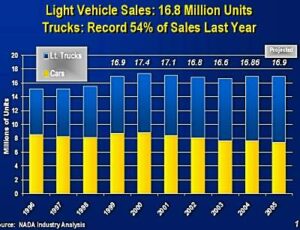 Vehicles are broken down by NHTSA into two different categories:

1) Passenger Car “ any 4-wheel vehicle not designed for off-road use that is manufactured primarily for use in transporting ten people or less.

Sport utility vehicles can climb the highest mountain, forge through the forests, take you to the opera and haul your kids and their stuff to any game you can imagine. The SUV is indestructible, right? Wrong, the SUV has an Achilles heel. It is the price of gas and the large SUV segment itself.

The SUV segment is comprised of two types of vehicles – the Sport Utility Vehicle (SUV) and the Crossover Utility Vehicle (CUV-CVT-or just Crossover). There are almost fifty SUVs and over thirty Crossovers that make up this segment. 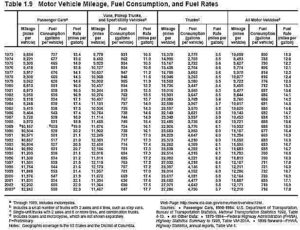 The year’s cars and light trucks have kept about a 4-5 mpg difference between them. The biggest difference is the miles they drive. In the 80s and 90s, when light trucks were not the majority of vehicles sold, light trucks drove further than cars, by about 2,000 miles. As the cars lose their market share, they are being driven more.

How/Why is this happening? Taylor notes that the cars that are being purchased are the big cars, cars that can carry five people, such as the Chrysler 300. “People are buying a car that is good in gas that meets their needs.” It also helps that the underpinnings are from its sister the Mercedes E-class. Even though hybrids make up less than 1 percent of the market share their mpg is high enough that they can drive that much further on one tank of gas, elevating the number of miles driven and the overall mpg.

On the light truck side, Crossovers are the main source of elevated mpg. Gas Mileage is close to that of cars that derive from Crossovers. A Crossover will give up several miles per gallon for four-wheel drive and another one or two mpg for the less aerodynamic shape. This increase in fuel economy practically guarantees an increase in the light truck segment. How does this affect the Manufacturers when it comes to meeting CAFE regulations? It works out well because light trucks only have to meet the 21 mpg regulation, where the cars have to meet the 27.5 mpg regulation.

The numbers are not looking good for the big SUVs. For the past three years, truck-based SUV sales have been falling. The Chevrolet Suburban was down year-to-date 29 percent, while the GMC Yukon was down 29 percent, the Ford Explorer down 23 percent and the Ford Expedition were down 25 percent. The numbers aren’t great for any manufacturer in the large SUV segment. Only the Nissan Armada and Suzuki XL-7 are projected to sell more vehicles this year than they did last year.

That’s only 2 out of 23 large SUVs selling better this year. In the mid-size SUV segment only the Infiniti QX56, Jeep Grand Cherokee, Nissan Pathfinder, Nissan Xterra, Land Rover LR3 and Suzuki Grand Vitara are expected to sell more this year than last year. That’s only 6 out of 22 mid-size SUVs. 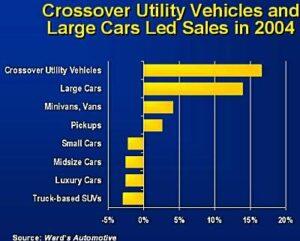 The mid-size CUV segment has sales increases for Chevy Equinox, Ford Escape Hybrid, Ford Freestyle, Hyundai Tucson, Mazda Tribute, Mercury Mariner, Nissan Murano, and Toyota Highlander. That’s only an increase in sales of 8 out of 23 vehicles, but overall crossovers are gaining while SUVs are losing.

Domestic manufacturers get the most attention when it comes to large SUVs for one reason – eighteen out of 23 large SUVs are domestic models. Ford has said that they see the trends in the marketplace and are bringing out mid-size crossovers to replace their large SUV market. Currently, only 12 percent of Ford’s production capacity. General Motors has said they are giving their large SUVs a facelift in hopes of creating an increase in sales.

Currently, GM’s production capacity for crossovers is 8 percent. GM is in for some severe challenges if they think that they should continue to rely on large SUVs as a profit maker. They are not the biggest reason CAFE doesn’t work. If you look at Table 1.9 “Motor Vehicle Mileage, fuel consumption, and fuel rates” in the third column you will see a grouping called Trucks. Trucks are not regulated by CAFE.

These vehicles include all Class 4 and higher commercial trucks and any pickup truck that weighs over 8,500 pounds, such as a 3/4 ton Ford F-350 and Chevy Silverado and the famous Hummer. Their mpg has not increased from about 5-6 mpg in the last thirty years, but the miles they drive have almost doubled to over 27,000 miles using over 4,700 gallons of gas per vehicle each year.

Barring the fact that the government could raise the gas rate to bring down the amount of gas being used, CAFE could start regulating the mpg of trucks.