Sorry that we couldn’t chat last week. We’re back!

The last time we chatted a chatter asked about the new concept from Continental AG, one of the big auto suppliers. They were showcasing a speakerless car; the system was built into the car instead. The chatter asked, “Using structural elements of the vehicle as speakers is very interesting as a proof of concept. What are the implications for maintenance and repair? As an example, would auto body shops have to source acoustically tuned structural pieces exclusively from the manufacturer?”

I sent the question to Continental, and this is the answer I got back, “We interpreted the question as asking if it is necessary that the repair or body shops have to buy spare parts of interior covers directly from the manufacturer. If this is what the viewer is asking then this is the case today and will remain in the future. For example, if your headliner is damaged today you need to buy a new one from the car manufacturer as the spare part is designed to fit in your car model. In the future, it will be the same, the spare part is developed to fit in the car and is designed for the acoustical properties that are needed in that specific vehicle.”

Audi had a 24-hour party to introduce the 2018 Audi A8, in Barcelona, Spain. Four different waves from around the world, six hours each to watch a beautifully choreographed world premiere. The event was hosted by Kunal Nayyar (known for his role as Rajesh Koothrappali on the CBS sitcom The Big Bang Theory). In the article, there are some videos of the unveil (I still have more to put up on youtube, hopefully, this week), but I also put some videos from 2010 at the Challenge Bibendum in Brazil, where Audi showed us what the future would look like with predictive traffic vehicle-to-grid. Watch one of the videos from 2010 and the video of today; it’s amazing how far we have come in technology and the way to show it.

I got home and flew to Detroit, MI for the world premiere of the 2018 Honda Accord. While most people are buying SUVs/hatchbacks, there are some hot sedans still, and the Honda Accord is one of them. A slew of new safety, infotainment, technology and a new design to boot. No EPA or $ numbers, but you know Honda is going straight after Toyota Camry and Hyundai Sonata. Bring it on! All the better for us buyers, right?

If you’re going to Detroit, MI there is a new hotel; the Foundation hotel across from Cobo Center. It used to be the Firehouse. The hotel is okay, a 3 out of 5, but what makes that hotel are the people working it. What a delightful group they were, especially that young Bradley. He knocked on my doot – da da da da da, and I knocked back da da and opened the door, and he said, “In the three years that I have been doing that you are the first person to da da back.” I’m happy to see Detroit coming back.

We drove the 2017 Volkswagen Atlas this week. I have written about the Atlas and am including the review. Out the door, the Atlas was $38,015. The EPA estimate is 18 city/25 highway/20 combined.

Oh, some of you have asked about which cars sell the best and who is outselling who. My friend, Wayne Gerdes, collates all the information monthly; here are June’s numbers. 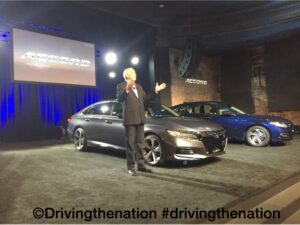 world premiere of the 2018 Honda Accord