When you think of space and automobiles, you would naturally think of Tesla Motors and Space X, but TRW was ahead of Tesla in space and automobiles. After Northrup Groman bought TRW, TRW Automotive wallowed a bit till ZF Friedrichshafen bought them. They are now ZF TRW Automotive Holdings Corp., and they are part of the group that will put the rest of the automotive suppliers on notice that they are an autonomous contender in the quest for Vision Zero vehicle world.

ZF is amassing a war chest of companies through acquisition and partnership in its quest to become a contender in the self-driving world of components they can offer car companies. Included in this war chest called Division E is a stake in Astyx Communication & Sensors GmbH (a radar company), an interest in Ibeo Automotive Systems GmbH (a lidar company) and an interest in double-Slash Net-Business GmbH (a vehicle networking company). ZF also is collaborating with French interior supplier Faurecia to create futuristic interiors for self-driving cars. 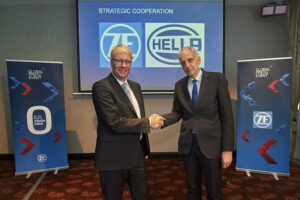 A non-exclusive strategic partnership with Hella, the German supplier with over 100 years old, specializing in lighting and automotive electronics was formed last week with ZF. In automated vehicles, it is the technology that makes all the difference. Hella brings the camera and light assistance needed for the highest Euro NCAP safety ratings for front cameras in all vehicle segments. ZF and HELLA will offer automotive manufacturers a joint product and are starting development immediately with an expectation of production in 2020.

As this technology trend continues, the auto suppliers are going to need to be systems suppliers of sensors, processing artificial intelligence, cyber security managers and cloud-based technology. All of this needs to be done now, with the understanding that the technology of the future will change exponentially in a very short span of time. Dr. Rolf Breidenbach, CEO at HELLA KGaA Hueck & Co., said that software would be a key, “we think that software will be a decisive factor combined with the newest technologies and artificial intelligence.”

Dr. Stefan Sommer, CEO of ZF Friedrichshafen AG said that they already see technology that they didn’t plan to see until 2025, “we created our strategy in 2013 we were talking about assist systems; lane changing assist, etc. We were thinking about autonomous driving, but we did not expect that autonomous driving would be an element in the specifications of our customers in the year 2021 or 2020 which is what we see today.”

Of course, each auto supplier wants to show the car companies as many of the components that work together seamlessly, on their platform. ZF is a transmission company, so they need other parts of the puzzle, such as cameras and lighting. All three companies are working with the software company, Nvidia.

At the GTC2017 Nvidia’s CEO, Jensen Huang pointed out that “if all the parts do not accelerate together it will make it a hard change.” I asked Breidenbach and Sommer which part would be the weak link.

Sommer pondered my question and said that “the biggest challenge from an ecosystem is not to have someone slow us down. It’s challenging to include artificial intelligence in the auto market, and redundancy, but we are all part of this common goal and support.”

With all the technology for autonomous driving, there is also the thought that more people will no longer need, or want, to own a single purpose car, which means fewer people are buying cars. The key will be whether car companies and auto suppliers can work like technology companies. If they can, they will reap the rewards of a larger piece of the pie in what might be a smaller market.